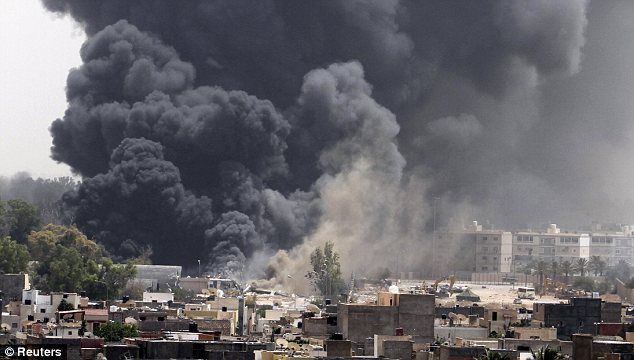 Five years after the U.S.-led destabilization and bombing of Libya began, imperialist attempts to establish a stable neocolonial-dominated regime have not materialized.

On March 19, 2011, the Pentagon and other NATO forces began the aerial bombardment of the formerly prosperous nation-state. After seven months of airstrikes and support for an imperialist-directed ground operation by proxy rebel militias, thousands were dead and millions displaced amid the ruins of hundreds of development projects and government institutions.

Leaders of the U.S., Britain, France, Italy and other Western countries, in cooperation with their allies in Africa and the Middle East, lauded the Libyan war as a success story in the remaking of the region, where rebel forces would do international capitalism’s dirty work. Hillary Clinton, then secretary of state in President Barack Obama’s first administration, laughed at the lynching of former Libyan leader Col. Moammar Gadhafi, saying, “We came, we saw, he died.”

Libya is now one of the poorest states on the continent and a source of instability throughout large sections of Africa and the Middle East. The once lucrative oil industry — which supplied resources for building hefty national budget surpluses — has all but failed. Substantial sections of extraction locations and refineries have been destroyed in fighting between rival groups backed by Western-allied governments, including Qatar, Egypt and Saudi Arabia.

Under Gadhafi, Libya enjoyed widespread recognition and respect among African Union member-states. The transition from the Organization of African Unity to the AU in 2002 was based upon the Sirte Declaration drafted by OAU affiliates in 1999.

Many of the declaration’s ideas and the AU’s founding documents attempted to address the need for greater African unity in economic, political, telecommunications, technical and military spheres. Dr. Kwame Nkrumah, Ghana’s leader from 1951 to 1966 and an OAU co-founder, called for a united government of Africa as the best method to fight imperialist dominance.

The Gadhafi government adopted this idea of fostering cooperation and coordination across the African continent. These political activities alarmed the West, prompting the destabilization and overthrow of the Libyan state, which remains in shambles.

Recent attempts to install a new, so-called “unity government” have prompted the Tripoli-based faction to declare a “state of emergency.” This grouping drove out the internationally recognized rival group now based in Tobruk.

Medicafricatimes.com website reported on March 25: “The reasons for the declaration were not officially stated but there are reports that the arrival of some members of the U.N.-backed Government of National Accord (GNA) in Tripoli provoked it.”

Numerous analysts view the GNA’s imposition as causing more chaos and instability. For instance, when the aircraft with German diplomat Martin Kobler, U.N. envoy to Libya, was unable to land on March 23 in Tripoli, the Libyan capital, he tweeted, the “U.N. must have the right to fly to Tripoli.”

Neither of the rival regimes has authorized the GNA, which announced in early March that it was assuming control on the basis of a petition signed by a narrow majority of Libya’s so-called “lawmakers.”

The plan for a coalition junta is designed to pave the way for a 6,000-person Pentagon/NATO-led intervention force under the U.N. rubric, brokered by Kobler. Having lost faith in local militias and political surrogates to provide stability in Libya, the U.S. and other NATO states plan to send in a military force to impose a neocolonial-dominated regime that would ensure compliance with Washington, London, Paris and Brussels’ foreign policy imperatives.

Stratfor Enterprises, a global intelligence firm, said on its website on March 21, “Western forces may soon intervene in Libya. … Two governments have been created … [though] neither recognized the legitimacy of the other. This is particularly problematic since Western intervention is contingent on a viable, singular Libyan government.”

The publication stresses that the putative success of the U.N.-engineered GNA could depend on the Misrata militia, which helps prop up the General National Congress regime that has taken over Tripoli. This militia gained a reputation during the 2011 war of regime change as extremely violent and racist in the campaign to overthrow Gadhafi’s Jamahiriya system.

Stratfor emphasized: Recently, “senior members of the Misratan militia have publicly supported the unity government, calling on the head of Libya’s Tripoli-based government to resign and cede power to the GNA’s proposed prime minister, Faiz Serraj.” This militia has ramped up its cooperation with the West, and is being trained by U.S. and British special operations forces.  Stratfor continued: “Its support for the new government will play an important role in the GNA’s success. Other militias in western Libya have joined the Misratan militia in backing the unity government.”

The British Guardian newspaper reported on March 25 that Jordanian King Abdullah attended a U.S. Senate briefing in January. He confirmed that Britain’s Special Air Services had been operating in Libya since the beginning of 2016. He revealed that Jordan’s “special forces” will “be embedded” alongside the British.

Abdullah said, “Jordan is looking at al-Shabaab” and “We need to look at all the hotspots in the map. We have a rapid deployment force that will stand with the British and Kenya and is ready to go over the border [into Somalia].”

Libya has become a pariah throughout North and West Africa due to the lawlessness characterized by human trafficking and harboring of extremist, destructive groups; an ongoing economic crisis exemplified by serious damage to the oil industry; and the growing presence of U.S. and British special forces and intelligence personnel.