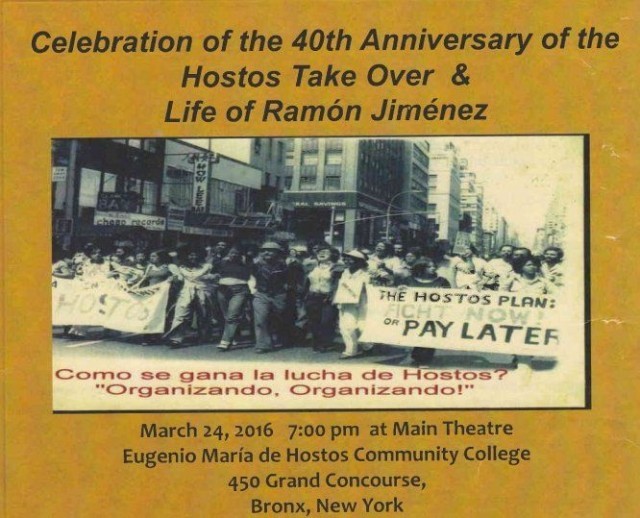 March 24 — They came to remember the past and envision the future. Current students, alumni and activists gathered in the South Bronx tonight to celebrate the history of Hostos Community College. Many brought their children or grandchildren to watch a brand new documentary film titled “Hostos: The Struggle, the Victory.”

Hostos is more than a college. It represents a community win, in an organizing effort led by revolutionary Puerto Rican New Yorkers who had been in the Young Lords Party and others who were just becoming politically conscious.

Hostos was the only bilingual institution in the City University of New York system in 1976, named after Puerto Rican scholar Eugenio María de Hostos. That year it was targeted to be closed down by an emergency financial control board.  The racist austerity plan also threatened predominantly Black and Afro-Caribbean Medgar Evers College.

A campaign of mass demonstrations culminated in a takeover of the Hostos building by students and professors on March 25, 1976, which lasted 20 days. The demonstrators organized meals, childcare and security along with round-the-clock vigils on the outside, while classes continued. They won the demand to keep both colleges open!  Forty years later, Hostos has grown to four buildings and remains a leader in re-entry programs for former prisoners.

Tonight’s event also paid tribute to people’s attorney Ramón Jiménez, who is both a veteran leader of the 1976 campaign to save Hostos and co-producer, along with Félix Romero, of the documentary film.

College President Dr. David Gómez and Bronx elected officials, who essentially owe their jobs to what one speaker called “the internal colony” that aspires to self-determination, shared the stage with organizers from El Maestro Cultural Center and the South Bronx Community Congress. Hostos graduate Víctor Vázquez, among others, emphasized the role of women leaders in making this struggle a success.

Other speakers included retired Hostos professor Gerald Meyer; State Assembly member Charles Barron; and a spokesperson for Venezuela. Activists from Philadelphia called on everyone to protest at the Democratic National Convention there, for Puerto Rico’s independence and for the release of political prisoner Oscar López Rivera. (For information on López Rivera, see tinyurl.com/h6xmpcr)

“Hostos: The Struggle, the Victory” is a powerful demonstration of how people’s power can beat back structural racism.  The hour-long documentary will soon be available for streaming.