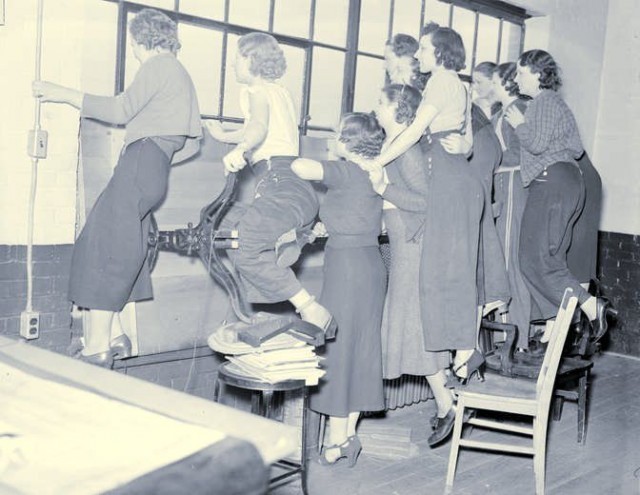 Detroit — 1937 was the year of the sit-down strike. Hundreds of occupations of plants and other workplaces were recorded, and many “quickies” went unreported. The stay-in strike tactic was used to win big gains, particularly to gain union recognition, but also to win grievances on a daily basis.

Detroit was known as “America’s strike capital,” boasting of more sit-downs than any other U.S. city. More often than not the occupiers were women. They showed incredible boldness in taking over factories — producing everything from auto parts to cigars to seed packets — as well as hotels, laundries and department stores. Polish immigrant women cigar makers waged a 66-day sit-down, the longest in U.S. labor history

Police were often brutal when evicting the women occupiers. A violent police evacuation of a cigar factory led the United Auto Workers to organize the largest rally in Detroit’s history. Some 250,000 people gathered in Cadillac Square on March 24.

UAW leaders threatened to hold two sit-downs for every eviction. For three weeks the city’s sit-downers — who typically occupied a half-dozen to a dozen workplaces on any given day — were left alone.

The peace was broken on April 14 with the forced evacuation of 120 strikers, 79 women and 41 men, from the Yale & Towne plant. The company employed about 400 women and a smaller number of men in the production of locks for Chrysler vehicles. All but 20 workers were signed up with the UAW. The union occupied the plant on March 9 after the company refused to negotiate on its list of demands; central was recognition of the UAW as the sole collective bargaining agent.

Beyond that, the women workers wanted an end to the piecework system and its replacement with a straight hourly pay rate. Doing piecework pushed the women to work at a breakneck pace just to earn enough money to survive. They also sought a pay increase from their 35-cents-an-hour starvation wage and an end to the pay shortages they experienced in addition to low wages.

The UAW attempted repeatedly to meet with management and negotiate an end to the strike. When the company went to court to evict the strikers, claiming the sit-down was illegal, the union’s attorney raised the company’s illegal and unfair labor practices. Not surprisingly, the court sided with the company. So did Wayne County Undersheriff Bernard McGrath, who was irked by the women’s “hold the fort” attitude. “Hold the Fort” was an old union song revived during the 1930s’ militant strike wave.

A combined force of 600 police and sheriff’s deputies, with injunction in hand, advanced on the plant. Outnumbering the strikers five to one, the cops nevertheless had a fight on their hands. Women had barricaded themselves inside the plant, while other strikers and supporters went to the roof and hurled lead weights and other projectiles at the police. When the union got word of the evictions, supporters massed at the plant, many of them Chrysler workers who had just completed their own victorious sit-down strike.

The women inside the factory were the hardest to evict. When they finally came out, the plant was so thick with tear gas fired by police that visibility was almost zero. The police called the young women, most in their teens or early 20s, “gas-eaters.”

All the strikers were arrested. They rode to jail singing “Solidarity Forever” despite nearly suffocating from the tear gas. They were released seven hours later when the UAW organizer arrived with a check to bail everyone out.

The courts found every striker guilty of contempt of court for defying the injunction, ignoring the union’s negotiations for a peaceful exodus from the plants. Had the police and sheriffs held off on the eviction, it would have taken less than an hour for the union to secure a voluntary evacuation.

After the sit-down ended, the strike continued with a picket line outside. Thousands of union supporters picketed in solidarity with these militant women. Chrysler workers pledged to refuse to install Yale locks on their vehicles.

It did not take much longer for the UAW, then a militant union organizing new members every day, to get Yale & Towne to give in and grant these courageous women their first contract.