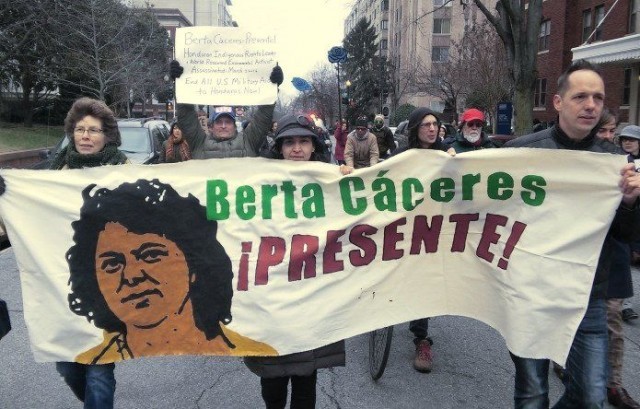 On March 15, just days after the assassination of Indigenous leader Berta Cáceres, news surfaced that one of her comrades, Nelson García from the Río Chiquito community in Honduras, had also been executed. Cáceres and García both belonged to the Civic Council of Popular and Indigenous Organizations of Honduras (COPINH ).

According to a COPINH communique released by the Honduras Solidarity Network, García was assassinated when he broke for lunch at his mother’s house after “having spent all morning helping to move the belongings of the families being evicted” in Río Chiquito.

Violent evictions were taking place just before his assassination in which “approximately 100 police, 20 members of the militarized police, 10 soldiers and several members of the … investigative police” invaded an area that 150 families had heroically taken over.

The families had built homes in Río Chiquito with materials they had been able to find. More than 75 families were evicted, their houses, gardens and a community oven destroyed. The community’s chickens were also killed.

Most of the media in this country, when they refer to Honduras, describe this Central American nation as “the most violent country in the world.”

Little explanation is given as to who commits the violence and why.

But the recent murders of Indigenous leaders and community activists are directly related to the 2016 U.S. presidential elections, especially the candidacy of former Secretary of State Hillary Clinton, who has responsibility for the killings.

Since 2009, most of the violence has been directed at the resistance movement. Murders, beatings, rapes and threats have all been waged against those who organize for their basic rights.

National Public Radio stated in July 2013 that in Honduras, a nation of only 8 million people, as many as 20 people were killed every day. A report by Telesur the next year said that “Homicides, feminicides, political persecution, disappearances and targeted assassinations have escalated since the 2009 military coup against elected President Manuel Zelaya.” (July 17, 2014)

Honduras is in a crisis. The national homicide rate for women is 14.6 per 100,000 inhabitants, making Honduras one of the most violent and dangerous places in the world for women, according to the community-based Jesuit station Radio Progreso.

Even to report this news is an act of resistance. One of Radio Progreso’s reporters, Carlos Mejía, was killed in May 2014. International journalists have been detained, including reporters for Telesur, while others have received death threats or been murdered.

Every sector in society has been targeted: campesinos/as, the Garifuna nation and political activists. Since 2009, more than 30 union members have been killed. (The Nation, December 2015)

In December 2009, a well-known international LGBTQ activist, Walter Trochez, who had traveled to the U.S. to speak about conditions in Honduras, was executed. The world mourned his loss.

It is no wonder, therefore, that mothers send their children to the U.S., or families find some other way to escape the violence. When fighting for LGBTQ rights or just a roof over your head or to stop a corporate dam from taking over ancestral lands is cause for assassination, you don’t have much choice. No matter how treacherous the road from Honduras to the U.S.-Mexican border, mothers, fathers and whole families are caught between a bloody rock and a very hard place.

During the Feb. 11 Democratic Party debate in Milwaukee, both Bernie Sanders and Hillary Clinton were asked about their solutions to the recent “child migrant crisis” that had captured the news some time back.

Clinton said unabashedly, “Those children needed to be processed appropriately, but we also had to send a message to families and communities in Central America not to send their children on this dangerous journey in the hands of smugglers.”

Almost one month later, during the Miami debate on March 9, Latino/a moderators sharply asked the question: “Would you as president deport children?” Both amazingly said no, although Sanders more forcefully.

But no one pointed out Clinton’s role in the mass exodus from Honduras. As secretary of state, she had more than supported the 2009 illegal coup that ousted President Manuel Zelaya.

“Hillary Clinton was probably the most important actor in supporting the coup in Honduras,” says American University professor Adrienne Pine, confirming what Berta Cáceres had said many times.

Clinton herself, in her book “Hard Choices,” wrote that in the days after the coup, “I spoke with my counterparts around the hemisphere, including Secretary [Patricia] Espinosa in Mexico. We strategized on a plan to restore order in Honduras and ensure that free and fair elections could be held quickly and legitimately, which would render the question of Zelaya moot.”

Why U.S. wanted Zelaya out

Why was Zelaya so dangerous to U.S. imperialism? Why did they want him out?

The International Action Center sent a delegation to Honduras with Honduras USA Resistencia not long after the June 2009 coup. Juan Barahona, labor leader and representative of the National Front of the People’s Resistance (FNRP), told the delegation that Zelaya had been about to support a major raise in the minimum wage. Others corroborated this, with some saying the raise was 60 percent.

“This infuriated two U.S. companies, Chiquita Brands International (formerly United Fruit) and Dole Food Company,” said John Perkins, author of “The New Confessions of an Economic Hit Man,” in an interview with the website Truthout. The big corporations feared that a rise in the minimum wage could spread to other countries in Latin America.

The 2009 coup helped militarize the country even further. Marjorie Cohen writes in Truthdig, “Amid all this, the United States has added two military bases in Honduras — bringing the total to 14 — and increased its financing of the Honduran police and military.” (March 15)

The illegal, U.S.-backed coup ousted a progressive president and ushered in a wave of repression. Hillary Clinton has the blood of Berta Cáceres, Nelson García and the over 25,000 people that have been killed since 2009 on her hands.