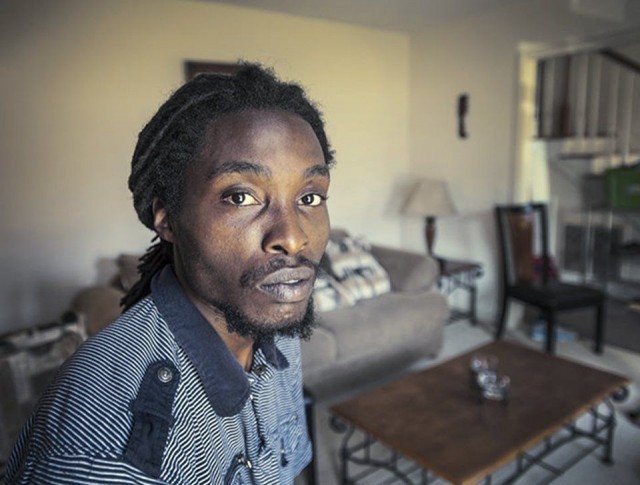 Racist billionaire Donald Trump held a March 9 campaign rally in Fayetteville, N.C., and was interrupted nearly 20 times by demonstrations inside the building, as another several hundred people rallied outside the arena. Rakeem Jones was assaulted by a white supremacist as he was being taken out of the rally by police — who then attacked him after he had been punched. Trump has offered to pay the legal fees of the white supremacist who punched Jones in the face. The man who assaulted Jones later made a threat against him on national television, saying, “Next time we might have to kill him.”

Jones spoke with Ben Carroll of the Durham Workers World newspaper bureau about what happened.

Workers World: What made you want to go to the Trump rally in Fayetteville?

Rakeem Jones: My friends and I just wanted to go at first to see what the hype was about. Where I come from, when I think of Donald Trump, you think of a billionaire, you think of Trump Towers and all of that, and I wanted to see it all for myself.  I’d kept up with his campaign and his talk about building a wall on the border with Mexico, about banning Muslims from the country, and it all seems wrong to me. Why are you messing with people and going against peoples’ rights, freedom of religion and trying to discriminate against all these different people?

WW: What happened when you were inside the rally?

RJ: We had come with a pretty diverse group. There were five of us altogether — three Black men, including myself, a white man who is a gay veteran, and a white woman. When you got into the arena you could feel it in the air, something bad. We were just there to look and observe really. We get to our seats, and there were a few speakers before Trump. Then Trump comes out. The woman that’s with us was talking to the rest of us and says “Trump is disgusting.”

At this point, a man on the same row as us a few seats down shouted at us to get out. He said it a lot more aggressively than that. We’re just here to look and he starts to get physical with us. Then they call the police over and by this time all the attention is on us. Ronnie, my friend, is recording to get Trump on film, but he’s able to get everything that’s happening to us on camera too. The police come over and I’m thinking they’re going to the guy who was yelling at us, but they’re coming to us to take us out. As we’re getting put out, Trump yells about going to our mamas, and that put me over the edge because my mom passed when I was 18.

As we’re getting escorted out by the sheriffs, this old white man in one of the aisles comes over and I got punched in the face. I told the sheriffs he hit me and they threw ME on the ground and got on top of me, and told the guy who punched me to go back to his seat. They took me out the door. I was talking to a reporter who got put out ‘cause they thought he was with us.

WW: What has happened since the rally and your story of being attacked has gone viral nationally?

RJ: It’s crazy. I’ve seen the videos afterward and how it’s been seen everywhere. This happened in my little town of Fayetteville and now it’s gone out internationally? And I heard later the man who punched me said that “Next time we might have to kill him.” Who is the “we” he’s talking about? And the fact that he said this on national television?!  I don’t feel safe anymore. I’ve got to keep looking over my shoulder ‘cause I don’t know when this “we” might pop up. All these comments people are leaving online about me now. I’m trying to make sure my family is safe. I can’t do normal things like I used to like taking the city bus because I get recognized everywhere now.

Before this, I wasn’t really into politics. It’s really got me thinking now, though, all the people getting put out of Trump rallies and roughed up by his supporters. I just saw what happened in Chicago, Arizona, St.Louis and the other rallies where there have been protests, and how what we did and what happened to me is part of all that.

WW: How can people offer solidarity to you and your family right now?

RJ: I appreciate all the ways that people have reached out to support me. If anyone would like to help, log on to www.justiceforkeem.org for all information.