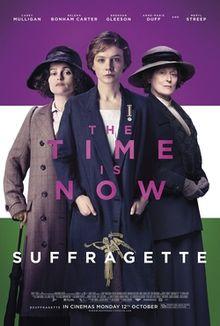 March is Women’s History Month. No study of women’s history would be complete without honoring the millions of women who fought fiercely for the right to vote.

There are few, if any, realistic depictions of this monumental movement on film. The Mary Poppins version portrays the magical maid’s wealthy boss, Mrs. Banks, prancing in her suffragist attire.

“Suffragette,” the film released last October and now out on video, presents a very different perspective on this early 20th century struggle in Britain. The story of the militant mass movement is set in London’s working-class East End and told through the eyes of 24-year-old laundry worker and mother Maud Watts.

Watts, a fictionalized character played by Carey Mulligan, has worked at the Glass House laundry for 10 years. The film graphically depicts the long hours, harsh working conditions and low pay that Watts and other young women endured, along with lewd advances by the boss.

At first aloof to the suffrage movement, Watts eventually accompanies her co-worker and seasoned activist Violet Miller to a meeting. Like thousands of other working women, Watts becomes convinced that nothing will change their lives for the better as long as women are denied the right to vote.

“Suffragette” takes place in 1913, when many courageous and committed women were jailed, risked death and carried out actions that went well beyond the nonviolent, legal tactics that had failed to yield results. Emmeline Pankhurst, militant leader of the Women’s Social and Political Union, incites women to rebel.

Everything from bricks to dynamite is used to send a message to the state that women refuse to accept their disenfranchisement. Watts’ growing commitment to the struggle and her multiple arrests take a toll on her family life.

Toward the end of the film, Emily Wilding Davison, an actual leader in the WSPU, is portrayed making the ultimate sacrifice. She gives her life for the cause of women’s equality. Masses turn out for her funeral.

The film is commendable for highlighting the role of working-class women as well as the militant tactics they used. Filmmaker Sarah Gavron has, however, been properly criticized for “whitewashing” the suffrage movement. All the suffragists shown are white — and English, except for a Welsh couple. The only Irish character is Inspector Steed, who sells his services by bragging of his past experience hounding Sinn Fein, the leading political movement fighting for Irish independence and unity.

Gavron’s response has been that “in the UK, the brilliantly diverse ethnic makeup that we have today emerged primarily in the 1950s,” and therefore working women of color weren’t part of Britain’s suffrage struggle. (bust.com/Suffragette)

In fact, for over a century, the poor East End had been home to African, South Asian, Irish and other oppressed nationalities. Asian, Jewish and Irish women were in the WPSU leadership The East End branch of the WPSU, allied with the trade unions, spoke up for Irish and Indian independence. Working women from oppressed nationalities were part of the voting rights struggle; even if their numbers were few, they belong in the narrative.

The filmmakers’ biased inability to portray women from oppressed nations is further demonstrated by the promotional shirts — worn by the stars, including Pankhurst portrayer Meryl Streep — which display an actual quote by Pankhurst: “I’d rather be a rebel than a slave.” As critic Holiday Black explained, “There is just no way on earth that being a white woman, at any point in history, is like being a slave.” (bust.com, Oct. 6)

Did the filmmakers think whitewashing the movement would give the film a better shot at the Oscars? The film was completely snubbed by the racist, sexist, anti-working-class Academy of Motion Picture Arts and Sciences, as well as the Golden Globes.

There is a bigger story, one of the multinational, politically conscious movement. Eventually the East End branch broke away from the WSPU, maintaining a working-class orientation and strong opposition to British imperialism. Leaders of the East London Federation of Suffragettes later helped form the British Communist Party. That story, too, needs to be brought to the big screen.