Human beings have been trading with each other for thousands of years. What is “free trade” now being touted? Just this: capitalist monopoly trade.

Globalization is over 500 years old. The capitalist world market was jump-started by the two greatest crimes in history: the African Holocaust and the extermination of Indigenous peoples throughout the Americas.

Karl Marx pointed out in “Capital” that the exploitation of European workers “needed, for its pedestal, slavery pure and simple in the new world.” The silver mines of Potosí in Bolivia — operated with enslaved labor for centuries — lubricated the new capitalist trading system. 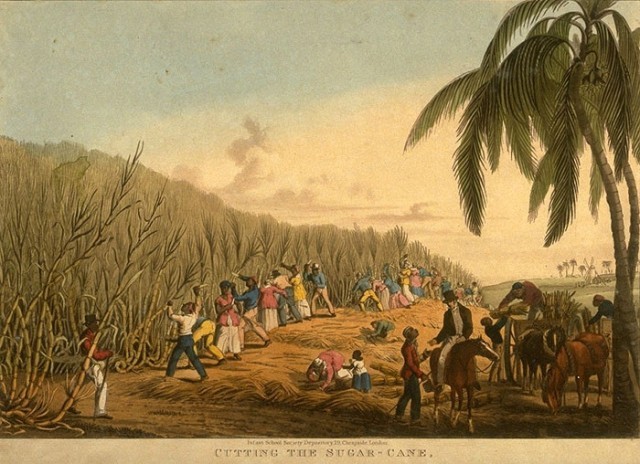 The Industrial Revolution was launched by the slave trade. “It was the capital accumulated from the West Indian trade” — that is, profits from slave-grown sugar — “that financed James Watt and the steam engine,” wrote Eric Williams, the first prime minister of independent Trinidad and Tobago, in “Capitalism and Slavery.”

Starving people became a source of profit for capitalist merchants. Referring to India, Marx wrote in “Capital” that “between 1769 and 1770, the English manufactured a famine by buying up all the rice and refusing to sell it again, except at fabulous prices.”

In the 1840s a million Irish starved to death as “huge quantities of food were exported from Ireland to England,” according to Cecil Woodham-Smith in “The Great Hunger.”

In 1943, a century later, 3 million Bengali people starved to death as food was diverted to British troops. Prime Minister Winston Churchill turned down offers of food aid from Canada and the U.S., while regretting that Mahatma Gandhi wasn’t one of the victims. (International Business Times, Feb. 22, 2013)

Why did Bernie Sanders praise Churchill during the Feb. 11 Democratic debate? That’s just as atrocious as Hillary Clinton lying about Nancy Reagan’s “very effective, low-key advocacy” about HIV/AIDS when in fact both Ronald and Nancy Reagan prevented any mobilization to fight the epidemic.

Capitalists are always trying to find new markets in order to sell their goods at a profit. Britain’s East India Co. earned vast profits by smuggling opium into China.

When the Chinese emperor tried to stop this drug pushing, the capitalist British government launched in 1839 a series of “opium wars” in the name of “free trade.”

A big victory for free trade was the 1846 abolition of tariffs on wheat imports into Britain. Capitalists claimed that “cheap food” would benefit workers.

At the time these same capitalists were fighting the adoption of a 10-hour work day. Twelve hours were then standard in British cotton textile mills. The cotton was picked by enslaved people in the United States working from “no see” at dawn to “no see” at night.

British factory owners wanted cheap imported food so they could reduce the wages of the then largely unorganized British workers. U.S. capitalists then use cheap imported clothing to keep pay low.

That has also enabled them to raise rents. Deutsche Bank estimates that today 30 percent of New York City households fork over at least half their income to landlords.

Among the job losers were members of Teamsters Local 808 at the Swingline stapler factory in Queens, N.Y., which shut down in the late 1990s. Racist Mayor Rudolph Giuliani actually hailed this plant closing. (New York Daily News, July 8, 1997)

But NAFTA’s biggest victims were Mexican workers and peasants. NAFTA effectively overturned the great land reform in the 1930s of Mexican President Lázaro Cárdenas. According to the Sierra Club, 2 million Mexican farmers have been forced off their land since then because of food imports from the U.S.

NAFTA overrides Mexico’s environmental laws. While children in Flint, Mich., are being lead poisoned, old lead batteries are being shipped to the Eléctrica Automotriz Omega plant near Monterrey, Mexico, where workers are poisoned. (Washington Post, Feb. 26)

Capitalist “free trade” is 1,130 garment workers being buried alive in the collapse of the Rana Plaza factory building filled with sweatshops in Dhaka, Bangladesh, on April 24, 2013. That’s nearly eight times the number of 146 workers, overwhelmingly Jewish and Italian young women immigrants, who were murdered by the bosses in New York’s Triangle Shirtwaist Fire in 1911.

Super-bigot Donald Trump wants to divert our anger over corporations killing jobs into hatred against workers in other countries. Capitalist candidates are bashing the People’s Republic of China, the Pentagon’s number one target.

It wasn’t China that shut down nine of the 10 auto plants in Flint — it was GM.

What we need instead is more workers’ solidarity. After Chicago workers launched the movement for an eight-hour day on May 4, 1886, four of their leaders — George Engel, Adolf Fischer, Albert Parsons and August Spies — were eventually hanged. But, inspired by what became May Day, the international workers’ movement won the eight-hour day for millions of workers, with the help of the Russian Revolution.