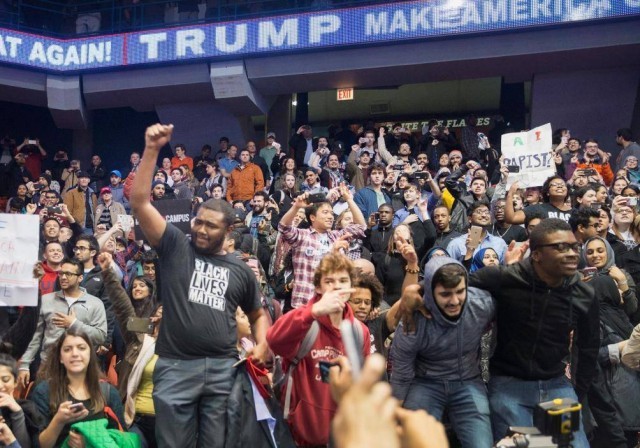 March 14 — The forced cancellation of the Donald Trump rally at the University of Illinois at Chicago on March 11 was a beautiful display of resilience and resistance led by the most oppressed. These are brave and conscious youth, Black, Latino/a and white, who should be congratulated and saluted for their militant actions. Instead, Trump, other right-wing politicians and some mainstream media called the anti-racist protesters “outside agitators” and “professional disruptors.”

UIC students had earlier submitted a petition with tens of thousands of signatures to the university administration demanding that the Trump rally be cancelled. But their petition was ignored. As a result, these young people said they had no other choice but to be inside to confront the white supremacists who came to support Trump. Thousands more anti-Trump protesters were outside blocking traffic and staying in the streets. Many of the protesters were of Mexican descent and carried signs reading “Liberation not deportation” in response to Trump’s virulent anti-immigrant rants.

It’s no coincidence that many of Trump’s rallies have been interrupted by young people, many of whom belong to or are inspired by the Black Lives Matter movement.

Trump has put out a call from the stage numerous times to his thug supporters to physically assault protesters, the majority being Black, Latino/a and Muslim. At a March 9 rally in Fayetteville, N.C., a young Black man was punched in the face as the police were escorting him out. Although this assault was captured on camera, the racist perpetrator was not arrested right then and there. When the cops eventually did arrest the racist attacker, Trump publicly stated that he would pay the attacker’s legal fees.

Now the authorities in North Carolina are investigating whether or not to press criminal charges against Trump for his exhortations to violence against protesters. (NBC News, March 14) Meanwhile, racist right-wing militias are organizing to act as stormtroopers against protesters at Trump rallies.

Bold young activists are an inspiration

Our campaign also deplores the role of the Chicago police, who are not neutral when it comes to the struggle between anti-Trump protesters and pro-Trump supporters. These are the same Chicago police who have slaughtered Black youth like Laquan McDonald, shot 16 times in 2014; Quintonio LeGrier, shot seven times; and Bettie Jones, a 55-year-old Black grandmother. Both were killed in 2015. We also condemn the role of the Kansas City police, who in cowardly acts twice pepper-sprayed an anti-Trump protest on March 12.

Those who stand for justice and people’s power must be supported, not demonized. Only those standing up against white supremacy and for class unity should have their First Amendment rights protected, not neofascists like Trump and his supporters. White supremacy should have NO voice because it is a dangerous obstacle to building class solidarity! We must not allow so-called liberals, right-wingers and the media to violence bait anti-racist fighters. The true perpetrator of violence is white supremacy in all its forms, including the police and state repression of the capitalist class.

We’re on the side of the oppressed and the workers. We’re on the side of socialist revolution, the only solution for the poor and the working class. We extend much love to the freedom fighters in Chicago, whose heroic actions will inspire others today, tomorrow and way beyond the November elections. Our campaign looks forward to being in the streets with these fighters this July in Cleveland and Philadelphia at the Republican and Democratic national conventions.

As presidential and vice presidential candidates, it is an honor to stand with these bold young activists who are an inspiration to the growing movement for social change and against racist terror.