On Feb. 18, Vermont passed a law granting paid sick leave to most full-time workers in the state. The bill, signed by Gov. Peter Shumlin, mandates that employers provide a minimum of one hour paid time off for 52 hours worked, or 24 hours/3 days a year. Some 60,000 workers are currently denied any paid leave, a large proportion of them women in fast food and other low-wage industries.

Gov. Shumlin praised the bill: “With 90 percent of food workers nationwide reporting that they go to work sick — and 65 percent of food-borne illnesses resulting from the handling of food by someone who is sick — this is as much a public health issue as it is one that reflects our values as Vermonters.” The law goes into effect on Jan. 1. Vermont is the fifth state to legislate paid sick leave. (Huffington Business, Feb. 18)

In another legislative victory for workers, Oregon Gov. Kate Brown signed a bill March 2 raising the state minimum wage to the highest in the country. Currently set at $9.25 an hour statewide, the minimum will increase over six years, capping off at $14.75 for workers in Portland, $13.50 in smaller cities and $12.50 in rural areas. (koin.com, March 2) 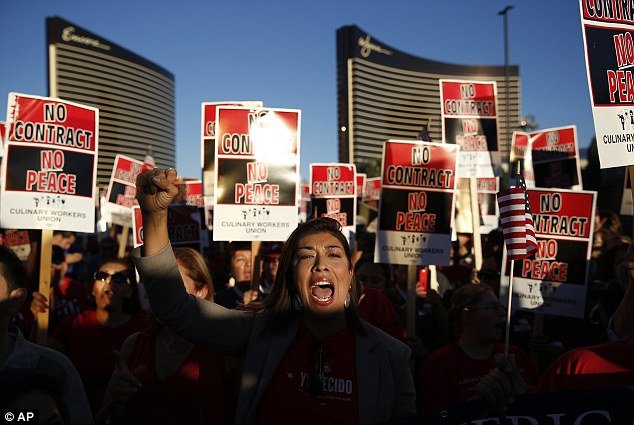 Although a majority of workers at billionaire demagogue Donald Trump’s Las Vegas hotel voted to join UNITE HERE’s Culinary Workers and Bartenders unions last December, management has still refused to recognize the unions or take a seat at the bargaining table.

As a result, the workers, many of them Latino/a immigrants, have joined the growing movement of anti-Trump protests sweeping the country. Hundreds of workers gathered outside the Trump Las Vegas Hotel on Feb. 23 for an informational picket line, chanting “No contract, no peace!” (motherjones.com, Feb. 23) On March 3, the workers traveled to New York to protest outside of Trump Tower Manhattan, where they delivered a petition to a Trump Organization representative. The workers plan to follow Trump along the campaign trail, organizing protests to coincide with presidential primaries in Michigan and Louisiana. (ibtimes.com, March 6) Stay tuned for updates on this struggle.

From March 2 to 12, farmworkers and consumer allies are mobilizing to bring Wendy’s — the lone holdout among the big five fast food companies of Yum Brands, McDonald’s, Burger King, Subway and Wendy’s — into the Coalition of Immokalee Workers’ Fair Food Program. Workers and consumers are taking the Fair Food message directly to Wendy’s corporate leadership in Columbus, Ohio, on March 2; New York on March 3; and Palm Beach, Fla., on March 12 — with other stops along the way in Immokalee, Fla., on March 2; Louisville on March 9; and Gainesville, Fla., on March 11. During the Columbus march, CIW announced its national boycott of Wendy’s, which switched from buying tomatoes from Florida growers to Mexico farmers after CIW’s initial appeal.

In 2011, CIW launched the FFP, a model for “Worker-driven Social Responsibility” based on a partnership among farmworkers, Florida tomato growers and participating retail buyers like Subway, Whole Foods and Walmart. In 2015, the FFP expanded to cover tomato growing in Georgia, South Carolina, North Carolina, Maryland, Virginia and New Jersey, as well as Florida strawberries and peppers. (ciw-online.org)

A hearing on the “Freelance Isn’t Free Act,” sponsored by the Freelancers Union and supported by a wide range of unions and workers’ groups in independent business and technology sectors, was held on Feb. 29 by the New York City Council. The union initiated the legislation, the first of its kind in the country, to counter widespread wage theft experienced by 70 percent of freelance workers, who account for 1.3 million workers in the city. A union survey showed that, on average, its members are robbed of $6,390 every year. One of the fastest growing segments of the workforce — one out of three workers are temps, moonlighters, solopreneurs, gig and self-employed workers — freelancers have none of the protections and benefits of 9-to-5 employees. The act would require written contracts with a job description, the rate and method of payment and the date when payment is due. Follow-up hearings are planned.

Davis is a longtime member and officer of the National Writers Union, United Auto Workers Local 1981, whose members testified at the hearing.