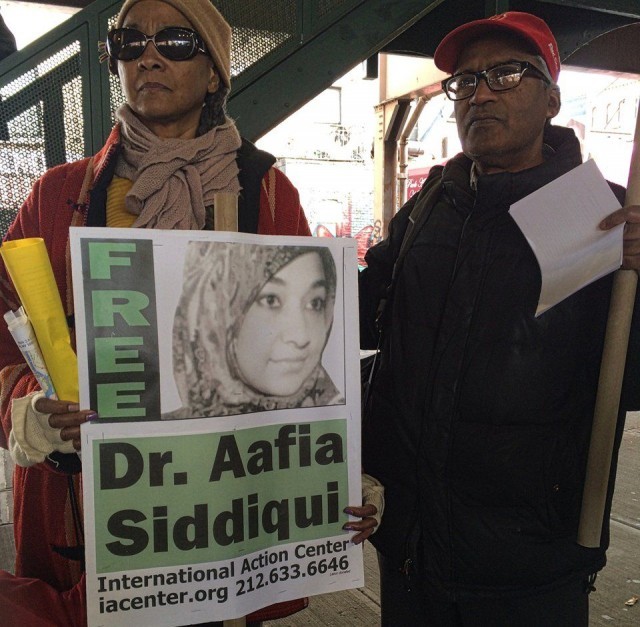 March 2016 will mark 13 years that Dr. Aafia Siddiqui has been a political prisoner.

Support Rallies will be held in:

Mauri Saalakhan of the Aafia Movement: “Four demonstrations during March, Women’s History Month, are calling for an independent medical team, including Dr. Fowzia Siddiqui, a medical doctor who is Aafia’s sister, to be permitted to visit Aafia to evaluate her health. The demonstrations will also demand the repatriation of Dr. Siddiqui to her home in Pakistan.

“Aafia Siddiqui’s life is on the line. She has not had a prison visit with any family member or her lawyer in more than a year. Aafia is a victim of the U.S. torture program in Afghanistan and of continuing prison abuse in federal prison in Fort Worth.

“From 2003 to 2008 there were numerous reports that Aafia was being held at a secret prison at the U.S. Airbase at Bagram, Afghanistan. In 2008 Aafia was brought to New York City, barely clinging to life, and charged with attempting to shoot her way out of captivity.”

“During her trial, Aafia called out many times her innocence and that she had been tortured and horribly abused. She pleaded for an end to the violent strip searches that preceded every day in court. She was continuously ruled disruptive and out of order.

“On March 30, 2003, Dr. Aafia Siddiqui, an honors graduate of Brandeis University and MIT, and her three young children (ages 6, 4 and 6 months) were kidnapped in Karachi, Pakistan, in a rendition operation ordered by the U.S. government — based on faulty ‘intelligence.’

“This horrendous violation of human rights must end. The secret prisons must end. Guantánamo Prison must be closed and Aafia Siddiqui must be returned to Pakistan.

Shahid Comrade of the Pakistan USA Freedom Forum explained that “an enormous movement of mass support for Aafia’s repatriation to Pakistan has swept Pakistan. Aafia has become a symbol of the thousands of disappeared prisoners. Millions of Pakistanis and all political parties from left to right, religious to secular, have demanded her return to Pakistan.

“Although Aafia was kidnapped in Pakistan, is a Pakistani citizen and was shot in Afghanistan, she was brought to New York City for a sensational show trial. Despite her serious injuries, she was held in solitary confinement. While no one was injured except her, and while the forensic and testimonial evidence pointed to her innocence, Dr. Siddiqui was found guilty in 2010 and sentenced to 86 years in ­prison.”

For info on the case: AafiaMovement.com