On-the-ground Alabama organizers are continuing the fierce, fighting spirit of the Selma-to-Montgomery march. The 51st anniversary of that historic journey, made by thousands in the teeth of Klan violence and racist state terror, fell on March 6. 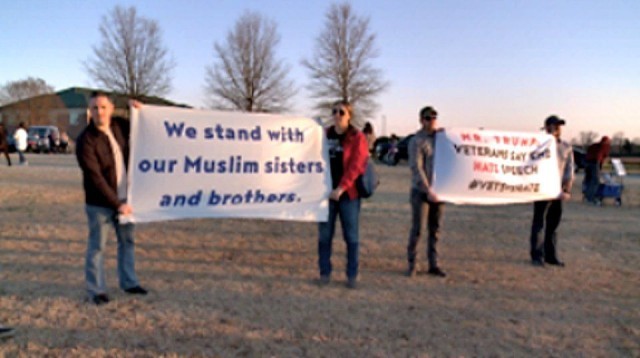 #VetsVsHate outside Alabama Trump rally after being ejected, Feb. 28.

On Feb. 28, about 40 members of Shut Down Etowah carried an empty coffin and sang outside the Etowah County Detention Center in Gadsden. They were protesting the death of Ethiopian national Teka Gulema, who was paralyzed from a bacterial infection while detained. A case of “fatal neglect,” he was released by authorities only to die two weeks later in a local hospital. As supporters marched, detainees inside could be heard banging on the prison walls. The Etowah Immigration and Customs Enforcement facility has been condemned by Detention Watch Network as one of the worst facilities in the U.S. (weldbham.com, March 1)

Also on Feb. 28, at a rally of 30,000 near Huntsville, several groups disrupted racist, anti-immigrant presidential candidate Donald Trump. Protesters with fists up chanting “Black Lives Matter!” heroically marched past Trump on the podium and also interrupted his speech later. These were students from Alabama A&M University and Oakwood University, two local historically Black colleges. Veterans Challenge Islamophobia held up signs: “We stand with our Muslim brothers and sisters” and “Veterans say end hate speech.” The vets were roughly ejected as Trump exclaimed, “Isn’t this fun?”

To get to the stadium, thousands of Trump followers had to walk by about 50 sign-holding and chanting protesters from women’s groups, peace groups and the Alabama Coalition For Immigrant Justice. (whnt.com, waff.com)

On March 1, more than a dozen Black Lives Matter protesters repeatedly interrupted a session of the Montgomery City Council. The multinational group, composed mainly of Black women, were outraged by the death of Greg Gunn, an unarmed Black man shot by a white cop while Gunn was walking home in his own neighborhood.

Karen Jones stood directly in front of Mayor Todd Strange and said, “It is a travesty that this council can go on as if nothing happened, without even acknowledging (Gunn’s) death, his murder.” Jones is a local activist who led the group of protesters. The Council abruptly adjourned its meeting.

By the next day, the Montgomery County district attorney had charged the white cop, Aaron Smith, with murder, an action so unusual that it brought national headlines. In the last decade, Montgomery police officers were dismissed for planting evidence, jailing people on false charges and beating suspects. All those targeted were African-American. (Montgomery Advertiser.com, TruthInJustice.org)