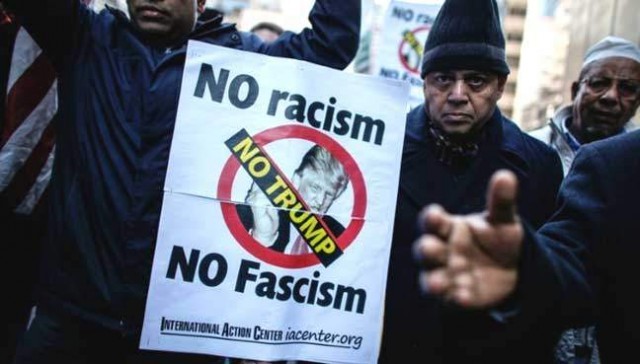 Political pundits, the media, politicians and people in general continue to be shocked that billionaire Donald Trump is still in the running for president.

Even members of the Republican Party say they are stunned that Trump is winning in poll after poll and primary after primary. Republican Lindsey Graham said, “My party has gone batshit crazy.” (AP, Feb. 26)

It is not known how long the Trump train will continue to charge ahead.  But two things are clear: The deep economic crisis has ushered in an unprecedented election year. And the Trump campaign has uncovered a cesspool of white supremacy, which only a multinational mass movement can clean up.

Gonna be a long eight months

It is too soon to determine whether Donald Trump will secure the Republican nomination, run as an independent or whether he can beat Hillary Clinton in a general election, should they each get the nomination.  All bets are off this year, as every new development has shown that this election cycle is a game changer.

An avowed “democratic socialist,” Bernie Sanders has projected a consistent anti-Wall Street message. Surprisingly, though Clinton was the hands-down favorite, Sanders has made her work for the nomination. The last weekend in February tens of thousands of people marched in over 40 cities around the country under the slogan “Feel the Bern.”

That so many would actively support a “democratic socialist” is a progressive development, especially when contrasted to the Trump campaign.

Sanders has said that his message of campaign finance reform has brought in many youth to his campaign, including those who were active in the important Occupy Wall Street movement.

Hillary Clinton has been forced to make a leftward turn in her rhetoric, opportunistic as it may be, and to address the issues of mass incarcerations and police brutality. Much of this change is a result of the Black Lives Matter activists who heroically confront her again and again, challenging the Democratic Party as a whole.

Donald Trump’s candidacy has galvanized not only ultra-conservatives but has become a magnet for ultra-racists and fascists.

Trump has opened up the vile, putrid can of worms of institutionalized racism that is part and parcel of capitalist society. His misogynist, anti-disabled, anti-Muslim, anti-immigrant tirades and second-grade level rhetoric have given a green light to every reactionary in this country.  Whether said explicitly or not, Trump’s campaign is appealing to those who would like to turn back the clock to a “golden age” of imperialism: before the civil rights and national liberation movements won major gains and before the working class, unions and the women’s and lesbian-gay-bisexual-transgender-queer movements made major advances.

Trump has summoned the poison of white supremacy. It is a poison that only the mass movement can overcome. History has shown that only mobilizations from below make fundamental change.

No candidate would be addressing police brutality were it not for the movement for Black Lives Matter.

The weekend of Feb. 27-28 was the racist weekend from hell. Not only was it the weekend of #OscarsSoWhite, but several reported racist incidents can be clearly attributed to Trump’s tirades.

In both Iowa and Indiana, white high school youths taunted Latino/as at basketball games, with chants of “Trump, Trump, Trump” in an attempt to intimidate them.

A Ku Klux Klan mob attacked anti-Klan protesters in Anaheim, Calif., mainly Chicano/as and Latino/as, and even stabbed them as the Latino/as attempted to push these racist scum back. In typical police fashion, the cops defended the Klan against the anti-racists.

These hateful incidents occurred as police continue to beat and murder youth of color, especially Black men, as tragically witnessed in Utah this weekend.

Lesson #1 about the role of cops in capitalist society is: They uphold racism while protecting the private property of the capitalist class.

How can this racism not be expected when the Klan endorses the Trump candidacy, and Trump quotes fascist Italian dictator and mass murderer Benito Mussolini, all in the same weekend?

CNN headlines on Feb. 29 read, “Trump tweets fascist dictator’s quote.” The picture with the caption was of Trump and Mussolini facing each other with Nazi-like arm salutes. Trump used the quote, “It is better to live one day as a lion than 100 years as a sheep.” When asked by CNN reporters, “Doesn’t it bother you to quote a fascist?” he basically said no.

The developments, rhetoric and posturing of the 2016 presidential election cycle are all a result of the current economic crisis.

The ruling class needs racism and anti-immigrant bashing when jobs are scarce. The bourgeoisie needs workers fighting and blaming each other instead of them. This is why Trump is dangerous.

But it is still not clear if Trump can serve the interests of the ruling class.

It is useful to Wall Street and the Pentagon for Trump to incite white people, many of whom are completely insecure about their own economic status.  His pandering serves the ruling class’ age-old divide-and-conquer ploy.  Dividing Black against white, Muslims and Latino/as and so on means the working class is fighting each other instead of the capitalist class.

But there are indications that the ruling class may be worried about being able to control rogue demagogue Trump and the opposition to him. A Washington Post editorial calls on the Republicans to stop Trump. Former CIA director Michael Hayden said that the military “would refuse to follow” Trump’s orders.

Hated billionaires, the Koch brothers, have indicated they lean more toward Marco Rubio.

But whatever develops in the long eight months ahead, one thing is definitely gestating: The working class and the oppressed will have a revolutionary option, the Moorehead/Lilly presidential campaign.

This campaign in the next eight months will raise revolutionary class consciousness with the aim to abolish capitalism, shut down the Pentagon, disarm the police and Immigration and Customs Enforcement, defend the Black Lives Matter movement and build revolutionary socialism. This is the best counter to the racist, neofascist forces gathering behind Trump.