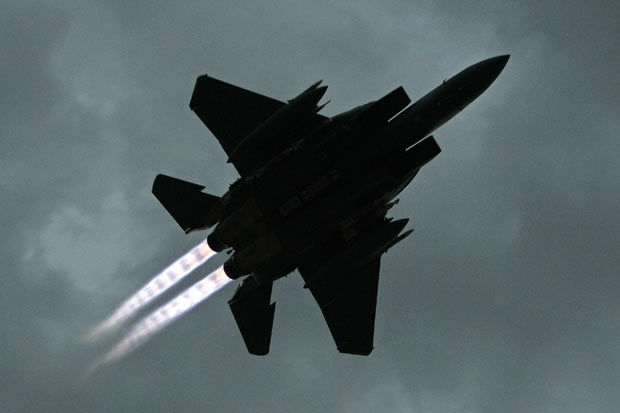 Over 40 people were killed by Pentagon F-15E fighter jets in a bombing operation Feb. 19 in Sabratha, Libya, which was said to have targeted an Islamic State group (I.S.) training camp. The air strike, 50 miles west of Tripoli, was aimed at I.S. operative and Tunisian national Noureddine Chouchane, who had been linked to an attack on the Bardo Museum in neighboring Tunisia in March 2015. He was accused of arranging the arrival of I.S. operatives in Libya.

The Pentagon said Chouchane was killed in the bombing. The attack follows similar airstrikes in June and November aimed at other I.S. leaders.

The Pentagon claimed, “[Chouchane] facilitated the movement of potential [I.S.]-affiliated foreign fighters from Tunisia to Libya and onward to other countries. Destruction of the camp and Chouchane’s removal will eliminate an experienced facilitator and is expected to have an immediate impact on [I.S.]’s ability to facilitate its activities in Libya, including recruiting new [I.S.] members, establishing bases in Libya, and potentially planning external attacks on U.S. interests in the region.” (Associated Press, Feb. 19)

This attack comes amid growing threats by United Nations envoy Martin Kobler to mobilize a 6,000-person military occupation force that would intervene in Libya to impose a proposed unity regime between two rival factions vying for international recognition. The unity accord between the two regimes is designed to pave the way for a deployment of imperialist-led troops with the approval of the militia-backed juntas in both Tripoli and Tobruk.

The proposed United Nations peacekeeping force would be led by Italy and include troops from Britain, France and other allied states. Britain has already said it is planning to launch air strikes inside Libya. (Daily Mail, Jan. 31)

Absent the consolidation of the accord bringing together the two Libyan camps, the Pentagon will continue to launch air raids and special operations strikes against rebel leaders.

The Obama administration has come under criticism for its war against Libya in 2011. Over the last seven years, the U.S. has continued its escalation of military interventions and building bases in various areas throughout Africa.

U.S. Africa Command (Africom) troops number in the thousands in the Horn of Africa state of Djibouti, spreading out operations into Somalia and Ethiopia, along the Indian Ocean basin across Central and West Africa, and into the Gulf of Guinea. Pentagon and CIA personnel work in close cooperation with other imperialist states seeking domination of the continent’s governments through trade, diplomatic maneuvering, intelligence penetration and military “partnerships.”

“We will continue to take actions where we’ve got a clear operation and a clear target in mind,” stated President Barack Obama. “At the same time, we’re working diligently with the United Nations to try to get a government in place in Libya. And that’s been a problem.” (New York Times, Feb. 16)

However, the interim regime in Libya designed to merge the competing factions based in Tobruk and Tripoli denounced the bombing by the Pentagon, saying the operation took place without the consultation of either faction. The lack of unity and uniformity of action among the regimes is raising doubts about the viability of the imposed government.

Tunisia, which was designated last year as a significant non-NATO state by the Obama administration, has escalated its security operations aimed at keeping armed groups from entering the country from Libya. Although Tunisia is sometimes called “the only democracy to emerge” from the uprisings in the region during 2011, the government in Tunis has maintained close ties with the Pentagon and with one of its principal allies in the Middle East, the monarchy of Saudi Arabia.