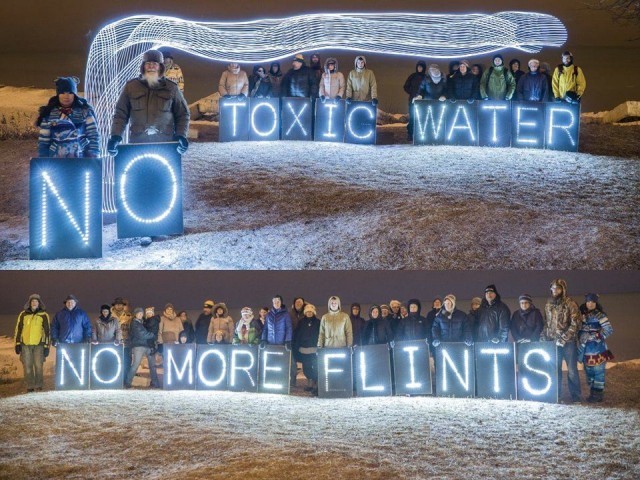 In the biggest mass action since the 2011 occupation of the Wisconsin Capitol building, over 50,000 people took to the streets and occupied Madison, the state capital, on Feb. 18. Coming from across Wisconsin in buses and car caravans, Latino/a’s flooded the state capital to demand an end to the racist attacks on their communities. The Wisconsin AFL-CIO issued a solidarity message and other labor and community forces lent support.

The protest, sponsored by Voces de la Frontera and Youth Empowered In The Struggle (YES), was in response to a series of attacks on immigrants and two specific anti-immigrant bills. AB 450 would let police and public employees investigate immigration status and detain undocumented people for deportation. SB 533 seeks to block a program created last year to provide local identification cards to Milwaukee residents who cannot obtain Wisconsin state ID because of immigration status or lack of documents or money.

The powerful action was a joint community-labor effort with strikes, business shutdowns and student walkouts. With 40 percent of the workforce on dairy farms being immigrants, the state’s dairy industry ran at a far lower capacity. El Rey’s, a Milwaukee-based Latino-owned business, closed all their facilities for the first time in 38 years, encouraging workers to attend the Madison protest. YES chapters played a decisive role in mobilizing youth and students at multiple schools and campuses in Madison, Milwaukee, Racine, Kenosha and other Wisconsin cities.

There are signs that legislators are now backing off on one of the bills, with the current Senate president stating it’s “not a priority.”

To support or for more information: vdlf.org.

Public advocates learned in January that a bill to make it easier to privatize public water systems was speeding through the Legislature. The state Assembly passed a measure by voice vote on Jan. 12. It was taken up by the Senate the week of Feb. 14.

After an emergency social media and phone call campaign, and protests at the state Capitol and other locations, the Wisconsin Senate took the vote off their calendar for now. It could be taken up again in March.

To support the fight for public water and for more information: facebook.com/OccupyRiverwest

Hands off our public schools!

On Feb. 17, walk-ins sponsored by the Milwaukee Teacher Education Association took place at over 110 K-12 public schools in the city. Walk-Ins were also held in Green Bay, La Crosse, Racine and elsewhere.

Students, parents, teachers, staff and community supporters held several events before the start of the school day. They then walked into their respective schools as powerful groups. Similar walk-ins took place at over 900 schools across the U.S.

The MTEA and community forces vowed to continue their defiance of a law signed by Wisconsin Gov. Scott Walker in July 2015.

Named the “Opportunity Schools Partnership Program” or OSPP, the law states that a set amount of Milwaukee schools on an annual basis would be deemed “failures” and taken over and run by a commissioner to be appointed by the Milwaukee County executive. A commissioner would have parallel authority with the elected Milwaukee Public School Board but be accountable only to the county ­executive.

Other outrageous language in the OSPP states that all workers at schools taken over would be fired and forced to reapply for their jobs. To be considered for rehire, workers would have to waive their right to be represented by a union.

Only mass resistance, including school defense actions, mass walk-ins, packing school board meetings and other resistance led by the MTEA’s social justice orientation and community forces, has stopped the law from being implemented.

The MTEA is also demanding that the state properly fund the district, put an end to charter schools and privatization, and stop starving public schools. The MTEA followed up the walk-in actions with a mass labor and community march to the county courthouse in Milwaukee on 3 Feb. 20.