With much attention being paid to the recent birth of more than 4,000 babies with microcephaly — abnormally small heads — in Brazil, an underdeveloped country with a history of colonial oppression and deep poverty, it is time to also turn a spotlight on infant mortality, maternal deaths and longevity in the United States, one of the most developed and wealthiest countries in the world, but one with a large number of very poor people and a history of virulent racism.

As reports of microcephaly became international news, the New York Times, the Washington Post and other news sources on Feb. 1 reported that, according to the American Academy of Neurology, an estimated 25,000 newborns receive a microcephaly diagnosis each year in the U.S. Unlike in Brazil, where an outbreak of the Zika virus is suspected as the possible cause, there is no such link here. Microcephaly can be caused by many factors, but the prevalence of microcephaly in the U.S. must be evaluated in conjunction with other devastating news on children’s and mothers’ health care in this country.

The U.S. has the worst rate of infant mortality in the industrialized or developed world, higher than any of the other 27 developed countries, according to a 2014 Centers for Disease Control report. The Washington Post called the CDC report a “national embarrassment.” (Sept. 29, 2014)

The CDC report found high rates of low birth-weight babies and birth defects. Most of these problems are caused by premature births, which are very high in the U.S.

As a whole, the infant mortality rate — babies who die before age 1 — in the U.S. has dropped from 9 deaths per 1,000 live births in 1990 to 6 in 2013. This figure, however, puts the U.S. behind 25 other industrialized countries. Even socialist Cuba, which has been under a U.S. blockade for more than half a century, has a lower infant mortality rate: 4.63 deaths per 1,000 live births.

However, this is not the whole story. For white America, the mortality rate is 5.2 infant deaths out of 1,000 live births, while for Black America the rate is more than double that: 11.5 deaths per 1,000 births. This means that Black babies in the U.S. have a survival rate lower than babies in 64 other countries, putting them at about the level of Thailand.

The role and responsibility of the capitalist class for this disastrous failing, here in the very center of world imperialism, must be highlighted. The clear impact of racism at every level of U.S. society and at every level of social services must be challenged. 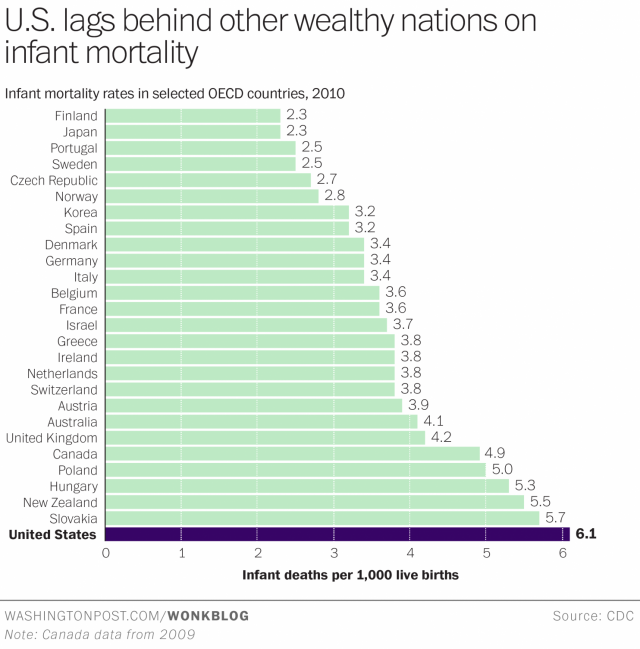 In most of the world, health statistics are showing steady improvement. But not in the U.S. Consider the statistics on the rate of maternal deaths, calculated during and up to 42 days after childbirth.

Globally, there has been a steady decrease in the rate of maternal mortality. The U.S. is the only one among the developed countries where the reverse is true.

A CNN report of Dec. 1, 2015, based on studies by the medical journal Lancet and the Centers for Disease Control and Prevention, stated: “It’s hard to comprehend how the United States, one of the wealthiest nations in the world, is now one of only eight countries — including Afghanistan and South Sudan — where the number of women dying as a result of pregnancy and childbirth is going up. …

A woman in the U.S. is more than 10 times as likely as a woman in Austria, Belarus or Poland to die from a pregnancy-related cause, according to the comprehensive report “State of the World’s Mothers 2015,” published by Save the Children. The report warned, “It’s the worst performance of any developed country in the world.”

Almost every commentary on this continuing deterioration in the U.S. explained that in every other industrialized country, all women had access to free or low-cost medical care, including contraception.

Child poverty in the U.S. is also the worst in the developed world and growing with every passing day.

For the first time in at least 50 years, a majority of public school students across the country are considered “low-income” and in need of basic nutrition, according to a 2015 study by the Southern Education Foundation.

Life expectancy in the U.S., despite stunning advances in medical science, has not kept up with the rest of the developed world. The U.S. ranks below 41 other countries in life expectancy.

Two studies, one from the University of Wisconsin that evaluated data from 1992 to 2006 and the other from the University of Washington covering 1985 to 2010, found that female life expectancy had either stagnated or declined in 45 percent of U.S. counties. While advances in medicine and technology have prolonged life expectancy and decreased premature deaths overall, women in almost half the counties in the U.S. were dying five years earlier than their mothers did.

This falling behind the rest of the developed world in infant mortality, in the percentage of children born with severe birth defects, in maternal mortality and in life expectancy is especially alarming because it has been happening under what are considered normal conditions. But lurking behind all these studies is the growing awareness that the U.S. is unprepared to deal with new or extraordinary crises, whether it is the outbreak of a new or unstudied virus, such as Zika, a climate catastrophe or an economic collapse that would wreak further havoc on the lives of millions who are struggling to barely survive.

Studies by respected international and national health organizations and concerned coverage in major corporate media can’t change these dynamics. The corporate ruling class in the U.S., with its tremendous control over the political apparatus, has been able to consistently sabotage government initiatives that could seriously reverse this slide, for one reason: profits. The concentration of wealth into fewer and fewer hands takes precedence over human needs.

This is the only statistic that is increasing at a rate never seen before — the concentration of wealth in the hands of a tiny group of corporate and financial owners. These figures on extreme capitalist wealth must be highlighted again and again when discussing the deteriorating conditions for millions of people.

To ignore the growing concentration of wealth hides the essence of the problem. The world’s 62 richest billionaires, many of whom use their financial clout to control U.S. politics, now have as much wealth as the poorest half of the world’s population. Their wealth has soared. Just five years ago, it was 388 megarich whose wealth equaled that of half of humanity.

Just to widen this to the richest 1 percent of the world, they now own more than the other 99 percent combined.

This is the roadblock to all human development.