Hollywood’s 2016 all-white Academy Award acting nominations carry on the tradition of excluding, more often than not, Black achievement in films. Hollywood is a reflection of mainstream society’s historical policies and practice of institutional racism, exclusion and elimination.

From time to time, however, there are exceptions to rules of law and custom, even while racial discrimination persists. One exception was an Academy Award given to Hattie McDaniel. It was the first Oscar awarded to a Black actor in 1940. 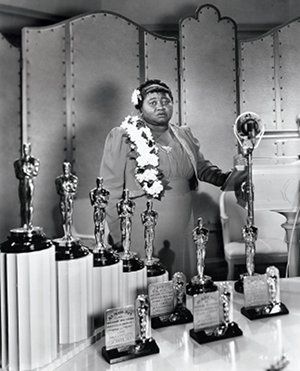 She won for best supporting actress in the 1939 film “Gone with the Wind,” which glorified slavery The story takes place on an Atlanta, Ga., plantation during the U.S. Civil War. McDaniel played the role of “Mammy,” a house servant to Scarlett O’Hara. Other Black actors in the movie, such as Butterfly McQueen as Prissy, were also house servants. Despite winning the Oscar, McDaniel and the other Black actors were barred from attending the film’s premiere in apartheid Atlanta. The Oscars ceremony was held in a white-only hotel where McDaniel was relegated to a segregated back banquet table.

McDaniel was born in 1893 in Wichita, Kan. She was her parents’ thirteenth child. Both parents were former slaves. Her father was a Civil War veteran who suffered severe injuries in the war. Her mother was a domestic worker. In 1901 the McDaniel family moved to Denver, Colo., where she was only one of two Black students in her class.

McDaniel had a career in singing and dancing professionally before she became a film star. While in high school she began performing with her brother’s troupe and later formed an all-women’s minstrel show. When she was 18 she married and eventually became an established blues singer and sang with bands. She was also one of the first African-American women to be on the radio. In the 1920s she toured with vaudeville troupes, as well as performing on a Denver radio station.

In 1931 McDaniel moved to Los Angeles where two of her siblings managed to obtain minor movie roles. Her brother also appeared on the radio there, where McDaniel too appeared. That same year she landed a tiny film role as an extra in a Hollywood musical. The following year she debuted as a maid in the film “Destino Rubio” and was featured as a housekeeper in the film “Gold West.”

McDaniel: A pioneer for African-American actors

In 1934 she got a big break in the film “Judge Priest” where she sang a duet with Will Rogers. In the 1935 film “The Little Colonel” starring Shirley Temple and Lionel Barrymore, McDaniel played the role of Mom Beck. The following year she played Queenie in the film “Showboat.” One of her most powerful but little known roles was in the anti-racist 1942 drama “In This Our Life” with Bette Davis and Olivia DeHavilland. McDaniel played a grief-stricken mother of a young law student falsely accused of a hit-and-run fatality.

To say that nonstereotypical roles for Black actors were hard to come by is an understatement. Throughout the mid-1940s Black actors mainly played roles that progressive Black people referred to as “offensive.” In some quarters the media also attacked McDaniel for accepting roles that perpetuated negative stereotypes of Black people. She was unjustly criticized for being satisfied with playing servants and slaves. She was not politically active, but in her Oscar acceptance speech she said she hoped to be a credit to her race.

McDaniel defended her right to accept whatever roles she chose. She also intimated that characters like Mammy demonstrated they were more than just meeting their employers’ standards. She responded that her choice was to either make $700 a week in film, TV and radio portraying a servant or to actually work as a servant for $7 a week.

The NAACP pleaded with ­African- American actors to stop taking such roles seen as degrading to Black communities. And they pressed Hollywood to begin creating characters that portrayed Black people as being unable to attain much more than cleaning, cooking and caring for white people.

During the Civil Rights Movement those denigrating movie roles for which Black actors were typecast began to disappear. In 1947 when her offers dried up, McDaniel accepted the starring role on the radio program “The Beulah Show,” in which she played a maid again. But she used her talents to shatter racial stereotypes, not reinforce them.

In 1951 while filming the TV version of “Beulah,” who was initially played by another Black actor and singer, Ethel Waters, McDaniel suffered a heart attack and was later diagnosed with breast cancer. She was replaced by actress Louise Beavers.

Hattie McDaniel died of cancer in 1952 and was inducted into the Black Filmmakers Hall of Fame in 1975. The then-Hollywood Cemetery, where many acting legends are buried, denied her request to be buried there due to their white-only policy.

McDaniel was a great actor who brought dignity to her roles, stereotypical or not.