The Democratic People’s Republic of Korea achieved another scientific-technological breakthrough on Feb. 7, lofting a space satellite into orbit. It was propelled by a powerful rocket and, predictably, the U.S. government reacted as though sending up a satellite were an act of war.

Washington has been trying to line up support for more sanctions against the DPRK because of its satellite launch. When that hasn’t worked, it just ratchets up the accusations and insults against the people of socialist Korea, especially their leaders.

Now, forgive us for not forgetting history, but which country is it that stations its troops right on the other’s borders and carries out huge military exercises there every year? And which country has flown nuclear-capable bombers close to the other in recent months? And which country invaded the other soon after World War II, killing millions and bragging that its bombers reduced all the cities and towns to rubble? 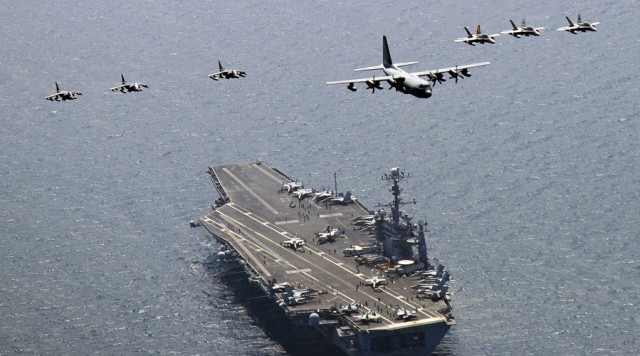 U.S. Marine Corps aircraft and jets over the aircraft carrier USS George Washington in the East Sea of Korea.

It is only because of the vile and fantastic character of U.S. anti-Korean propaganda that many people here are confused. They see melodramatic movies about Korea invading the U.S. Talk about turning reality on its head! The Hollywood garbage machine worked overtime on that one. But it’s not just Hollywood, it’s the entire web of the capitalist-owned press and electronic media that marches in lockstep, assuming that everyone will automatically believe their endless hostility against the DPRK. The propaganda mill never says a word about the terrible war crimes committed against the people of Korea when some 6 million U.S. military personnel were ordered to participate in the war against the DPRK.

Like all the rest of the world, socialist Korea has the right to develop its scientific-technological capabilities, which includes utilizing space satellites for communications, weather observation, mapping and defense. That this small country has progressed so far despite all the threats and sanctions imposed on it, all the efforts to cut it off from the rest of the world, all the attempts to starve its economy, is a testament to the ingenuity, creativity and unity of its people.

Since the beginning of their revolution against Japanese colonialism, the Koreans have shown the greatest determination to follow their own path to development, not by following the dictates of a capitalist class dependent on foreign imperialism, as existed during the 35 years of Japanese colonial rule over Korea, but by applying socialist principles to the growth of the economy while guarding their sovereignty and independence.

It’s time for all who are sick and tired of predatory imperialism and capitalism to speak up in defense of the DPRK.