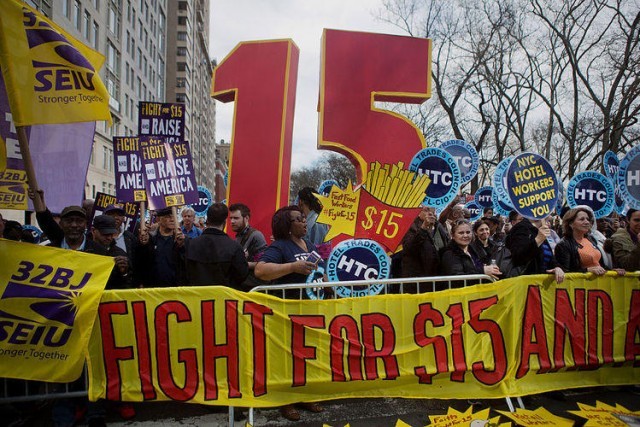 A few hours before the Jan. 28 Republican presidential primary debate in Iowa, fast food workers walked off the job in the state’s first fast food workers’ strike. Several dozen workers and supporters blocked traffic and marched through the streets of Des Moines to demand a $15 minimum wage and a union.

Childcare worker Alexis Wright joined the protest to show class solidarity. “I’ve lived in Iowa my whole life,” she said, “and in the past 10 years, our cost of living has gone up so much, but our wages haven’t gone up any.” Iowa’s minimum hourly wage, among the lowest in the country at the federal minimum of $7.25, leaves even full-time workers unable to afford child care. “Fight for $15” organizer Terrence Wise addressed the politicians: “If you’re not supporting $15 an hour and affordable child care, you won’t get our vote.” (thinkprogress.org, Jan. 28)

Airport workers, including baggage handlers and janitorial workers,  predominantly people of color, commemorated Martin Luther King Jr. Day, Jan. 18, with protests in at least 10 cities. They demanded $15 an hour, benefits and a union. Joined by the Service Employees union, workers blocked traffic in Washington, D.C., to call attention to widespread poverty wages in the industry — the minimum hourly wage is $6.75. David Tucker, who, after 54 years working as a skycap at Reagan National Airport, only makes $3.77 an hour, explained, “All my children are grown, so it’s not like I need a whole, whole lot of money, but $15 an hour is not a whole, whole lot of money.” (wusa.com, Jan. 18)

D.C. Rep. Eleanor Holmes Norton joined the action and stated: “Dr. King was assassinated in Memphis, where he had gone to stand with sanitation workers who faced inhumane conditions at work and poverty wages. I want to carry on the King legacy by standing with airport workers … whose jobs have been contracted out to companies paying shamefully low wages.” (dclabor.org, Jan. 18) Statistics show that the average hourly wage declined 45 percent after the airlines, which 10 years ago employed these workers, outsourced jobs to contract companies.

Washington state dairy workers, supported by the United Farm Workers and state labor and faith groups, held a vigil on Jan. 18, Martin Luther King Jr. Day, at the state Capitol in Olympia to announce the introduction of House Bill 2484. The landmark dairy safety bill is needed to end deaths and rising injury rates at Washington dairies.

During a hearing on the bill, Alberto Garcia, who worked in the dairy industry for 20 years, described being trampled by a bull for 30 minutes with no one around to help him. He ended up in a coma in a Seattle hospital with severe internal injuries and barely survived. Since then, he has suffered physically and psychologically, and his family has suffered financially. “I don’t want that to happen to other families because there is no safety and training for the workers,” Garcia told the House committee. (The Stand, Jan. 19)

Fight for Nabisco jobs in Chicago

In July 2015, Nabisco, a subsidiary of global snacking powerhouse Mondelēz International, announced it would invest $130 million in a plant in Salinas, Mexico, instead of investing in its historic Southside Chicago Nabisco bakery, unless the workers came up with $46 million in annual savings in perpetuity. To do that, the workers, members of the Bakery union (BCTGM), would have to take wage and benefit cuts of $22 to $29 an hour every year. If the company, which raked in more than $30 billion in 2014, moved Oreo and eight other product lines to Salinas, Chicago would lose 600 good-paying jobs.

Join the fight to keep Nabisco jobs in Chicago by signing the BCTGM petition at tinyurl.com/hnbnvln. The petition is addressed to Mondelēz CEO Irene Rosenfeld, who banked $21 million in 2014, for a total of $170 million over the past eight years.

Equal pay for all women workers

Because the Lily Ledbetter Fair Pay Act was signed on Jan. 29, 2009, that date is commemorated by women’s, union and legal groups to mark the continuing struggle for equal pay for women workers. Ledbetter successfully sued Goodyear Tire for discrimination, but the Supreme Court overturned the ruling in 2007. The fight for equal pay persists. Today women make only 79 cents for every dollar a white man makes, with women of color making much less. The struggle for the Equal Rights Amendment continues.