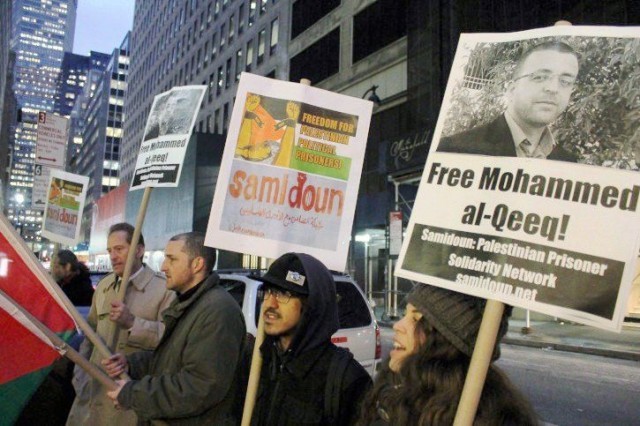 New Yorkers took to the streets on Jan. 22 and again on Jan. 29 to protest the complicity of the G4S corporation in Israel’s imprisonment, torture and oppression of Palestinians, and to call for freedom for imprisoned Palestinian journalist Mohammed al-Qeeq. January 29 was al-Qeeq’s 66th day of hunger strike. He is now shackled to a bed in Afula Hospital in critical condition and has been denied access to independent medical care.

The Israeli military ordered Al-Qeeq imprisoned under administrative detention for six months, renewable without charge. He has had no trial and any evidence against him is secret. Al-Qeeq is the latest of a number of Palestinians – including fellow journalist Nidal Abu Aker – to undertake a long-term hunger strike against the use of administrative detention without charge or trial. Some 45 prisoners affiliated with the Palestinian leftist party, the Popular Front for the Liberation of Palestine, launched a two-day hunger strike in solidarity with al-Qeeq, demanding his immediate release.

The Samidoun Palestinian Prisoner Solidarity Network has been holding weekly protests outside the New York offices of the firm G4S, the world’s largest “security” company and second-largest private employer. G4S provides security systems and control rooms to Israeli prisons, checkpoints and police training centers, placing G4S and its equipment at the heart of the “matrix of control” that governs Palestinian lives under occupation and apartheid.

Some 220 community organizations, trade unions, faith and student groups from around the world, following calls from Palestinian prisoners and Palestinian organizations, have urged a boycott of G4S. An international petition has especially urged the United Nations to stop doing business with this multinational corporation because of the role it plays in widespread torture and human rights abuses in Palestine and around the world.

In late January the Hollands Kroon municipality in The Netherlands rejected a contract with G4S following a campaign by BDS activists, including the GreenLeft party, urging that G4S be excluded on human rights grounds.

G4S also runs prisons and immigrant detention centers in the U.S. and in many other countries.

Join Samidoun Palestinian Political Prisoners Solidarity Network every Friday at 4 p.m. as it pickets in front of the office of G4S at 17 West 44th Street in New York.