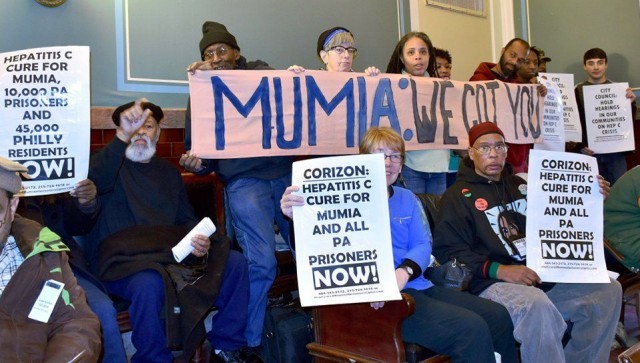 The group distributed a flier to city officials and audience members on the dangers of untreated HCV. It also addressed Corizon’s deadly pattern and practice of withholding medical care in order to save money and maximize profits.

The denial of health care to the state’s prisoners eventually impacts urban communities as prisoners return home. An estimated 45,000 people in Philadelphia already have hep C. Left untreated, the virus causes liver disease and other complications that are fatal.

In 2013, the U.S. Food and Drug Administration approved Sovaldi, a new direct-acting antiviral drug. However, it costs $84,000 for a 12-week treatment course. Gilead Sciences, which controls sale of the drug, subsequently marketed Harvoni, Sovaldi’s successor, at $94,000 per treatment course.

Because of the high costs, less than 3 percent of Medicaid enrollees are able to receive the new cures. Very few prisoners with hep C can get these medications.

While not allowed to raise their demands from the floor of the Council meeting, protesters arranged for a meeting with some of its members. They also received broad support from members of Philadelphia’s Muslim community who were at the Council meeting to push for the city’s school district to recognize and observe Muslim holidays.