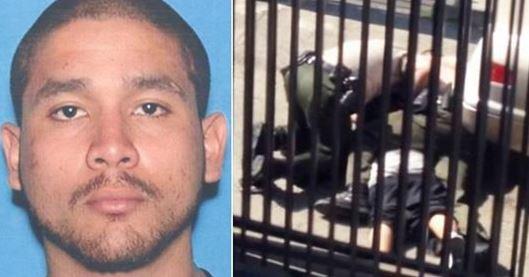 Long Beach, Calif. — More than 300 protesters gathered to demand accountability for the murder of Noel Aguilar on Jan. 16 in Long Beach, and then marched to the Compton Courthouse, shutting down the Metro Blue Line along the way. Aguilar was brutally killed in May of 2014 by two Los Angeles County Sheriff’s officers who then lied to cover their crime.

Aguilar’s family has recently been able to secure a video of the 2014 incident which clearly shows one sheriff first accidentally shooting his partner, and then attempting to execute Aguilar while Aguilar’s hands are behind his back. The officer who was shot by his partner then fires four more rounds into Aguilar’s back as he lies on the ground, handcuffed. Bystanders are heard off-camera describing the execution.

We watch. A thin, young body flounders on the ground as heavy men bear down on his back relentlessly. The men are stiff, their motions heavy and unarticulated. We feel the desperation and fear of their victim. We know his panic. One inept officer shoots his corpulent partner. The truth from May of 2014 is now undeniable, trapped in video evidence.

We already know Noel’s fate before the video starts to play. We have heard his story told by his mother, his fiancee, his friends, so we watch knowingly for his execution. We attempt to brace ourselves as we bear digital witness to murder. The shooting officer now focuses his weapon on Noel and pulls the trigger casually; a lubricious murder, a crime that was committed as easily and freely as taking a deep breath. Unsure if the shot landed, the next officer does the same: He shoots. For these officers, this is standard practice. Stopping a young man, invading his privacy and body, and then ending his life. For we at the bottom have nothing. Our freedom is limited to the dispositions of the ruling class.

We wait. Each time we lose a life to the police a small part of us waits for justice. We wait for a break in the system, we wait to be recognized, we wait for someone to do the right thing. This waiting lasts only moments. Again we see the coverup, the dismissal, the victim blaming. We know justice cannot be served through this system.

We organize. Noel’s fiancee, Mary Herrera, galvanized by her infant daughter Noely, leads the effort. She has strong support from Long Beach organizers including Michael Brown, co-founder of Black Lives Matter Long Beach, who has been rallying supporters from all over Los Angeles to “ask for accountability and justice.” Brown explained, “(Noel) was killed by deputies [Jose] Ruiz and [Albert] Murad,” and both officers were cleared of any wrongdoing in February although they gave several contradictory reports throughout the investigation. Dozens of organizations and individuals lend their support and voices.

We gather. Organizers specifically picked the weekend before MLK Day to bring awareness to the continued violence against Black and Brown bodies that continuously increases. By 12:45 p.m., the parking lot of Eddie’s Market is filled with protesters. Mothers and families who have lost their loved ones proudly wear the red T-shirts made to honor Noel’s final words as he fought for his life: “I’m dying.” Organizers pass out buttons, posters wave about babies’ strollers demanding police accountability. Entire families unite in the anger created by the last images of Noel as he lay bleeding to death under the weight of his murderers. Traditional “concheros,” ceremony dancers, perform a ceremony and honor Noel before we depart for the Compton Courthouse.

We march. Three hundred protesters make the three-mile trek to the Compton Courthouse and police station. The protestors march for the honor of those killed and to protect the lives still under threat. We show solidarity, strength and rage. We march to save further generations from Noel’s fate and to create a better future. We are able to shut down the Metro Blue Line and take over the streets. Most importantly, stopping business as usual. Forcing Noel’s story to be known. The residents, business owners and motorists show overwhelming approval and many passing pedestrians join in the journey to show their support of Noel and condemn the police violence that has been ravaging their communities.