Workers World is publishing this Jan. 9 interview with Tatiana Rybalko conducted by Alexey Albu, a leader of the Marxist organization Union Borotba (Struggle) of Ukraine and Novorossiya. It was translated by WW contributing editor Greg Butterfield. As our regular readers know, a coup in February 2014 placed a pro-NATO government in the Ukraine that relies on fascists. A large majority of people in the Lugansk and Donetsk areas of the Donbass region on the Russian border have chosen to set up republics and defend themselves against the Kiev regime. The Ghost Brigade, part of the Donbass armed defense, has many pro-communist volunteers. Rybalko, a native of Mariupol, volunteered in the Ghost Brigade after escaping from Kiev’s torture chambers.

Alexey Albu: Tell us about yourself. Who were you before the war; what did you do? 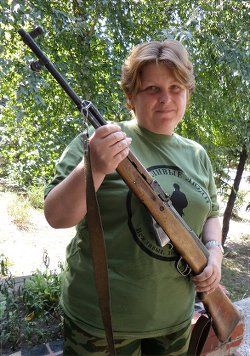 In February 2014, I became a leader of the city’s Anti-Fascist Committee. I took part in rallies and protests. Also starting from April 2014, I was a member of the initiative group of deputies of the Donetsk People’s Republic (DNR) in Mariupol. I became a member of the city commission after the referendum of May 11, 2014. From June until the day of my kidnapping, I collected humanitarian aid (food, clothing, medicines) for our guys who fought in the militia. However, people brought only a little; in the Ukrainian-occupied city, doing this was dangerous. In other words, even under the pressure of Ukrainian nationalists, we continued to fight for people’s power against the Nazis and their henchmen.

AA: How were you captured?

TR: I went to work on the night shift. Just 10 meters from home a “Gazelle” van drove up. Unknown people threw a bag over my head, handcuffed me and dragged me into the van. On the drive, I was badly beaten. We stopped several times, I was taken out, put on my knees and beaten again. [They said,] “You will be shot.” As I later learned, they were neo-Nazis from the Azov battalion.

When they brought me to their camp, which was located on the territory of Mariupol Airport, I was thrown into a cell 1 meter wide, 2 meters long and 2 meters high. [1 meter = 3 feet, 3 inches] On the same day, without removing the bag and handcuffs, I was taken to interrogation. The interrogation was brutal. I was hung up, drowned in water tanks, tortured with electroshock. They beat my entire body, especially my head.

I was removed “to be shot” (a machine gun was jammed into the top of my head, simulating the penalty) and imprisoned in a pit with corpses. It lasted 10 days, and then I was taken out by the SBU [Security Service of Ukraine]. The SBU charged me with “treason,” “terrorism” and “separatism.”

AA: What were the conditions of detention for prisoners of war and political prisoners?

TR: As I said earlier, I spent the first 10 days in the “Azov” camp. There I was fed once a day and tortured. I had to sleep on a concrete floor.

Then I was in jail for 56 days. The ratio of inmates to prison guards was normal. I was taken in for questioning by the SBU; they didn’t beat me, but very much psychologically pressured and blackmailed me.

AA: How did you manage to get out?

TR: After the negotiations in Minsk in December 2014, I was placed on the list for the exchange of prisoners of war. The exchange took place in the area of Yasinovataya (DNR). I want to say a few words about the attitude toward the prisoners. They referred to us as cattle, and even worse. They carried us to the exchange in stuffy buses, shackled in handcuffs and duct taped to the seats.

With us in the exchange were four badly wounded militiamen. All the way (which was 20 hours), the guys suffered pain and assistance was not provided to them. Most offensive was that those for whom we were exchanged walked as if coming from a resort, and we were all battered and broken.

TR: Now I’m a soldier of the Ghost Brigade, commandant of the military dormitory.

AA: In your opinion, why did the Communist Party withdraw from the revolt in Southeast Ukraine?

TR: I find it very hard to talk about this, because I myself was a member of the party, and it is a very painful experience. But the leadership of the Communist Party is a disgrace to the communist movement. I think they kept aloof from the uprising in the Donbass due to corruption of the party leadership and wanting to stay “clean” in the event of the failure of the uprising.

AA: In your opinion, is there today the ability to create women’s combat units along the lines of the women’s self-defense units in Kurdistan? Is there a need for this?

TR: The opportunity is there. We have a lot of women in the army and many who want to fight. I think there is a need. Unfortunately, most men have fled to Russia, or they think they do not need to defend their land. Not all of course. I apologize, but there was a degradation of the male population of Donbass. Not all went out to defend their land, their loved ones. Many simply ran away.

AA: How are women treated in the Lugansk militias?

TR:  In the Brigade we are treated OK, but again, unfortunately, not by all. And for all of the Lugansk People’s Republic I can’t say. I know one thing: that the army is reluctant to take women, based on the conditions: maximum age of 35 and previous military training.

AA: What would you say to those who stand on the other side of the front line?

TR: Since I am a Ukrainian (according to the 5th column of the Soviet passports, and since my ancestors were Zaporozhye Cossacks), this is what I’d say: “Guys! Our common enemy is sitting in the Verkhovna Rada in Kiev and Washington.

“You come to our land, kill us, and meanwhile, your home and your family are being sold to Uncle Sam. And the delusions that you are fed, about Greater Ukraine, are pure theater. You do not need to fight with us, but deploy your weapons and go to Kiev to remove the ‘tick’ [parasite] from your land. Only after the overthrow of the junta (which came to power through an illegal, armed coup) will there be peace in our land.

“You are driven to the slaughter, you are made into a bargaining chip, but no one helps you if you are wounded, and in the event of your death no one will help your family. Sent to the Donbass, you have been written off. Think! You’re dying to make Yatsenyuk, Poroshenko, Turchynov, Tymoshenko and others like them in Kiev richer.”

AA: How would you like to see your country after the victory?

TR: Only socialist and only with Russia.