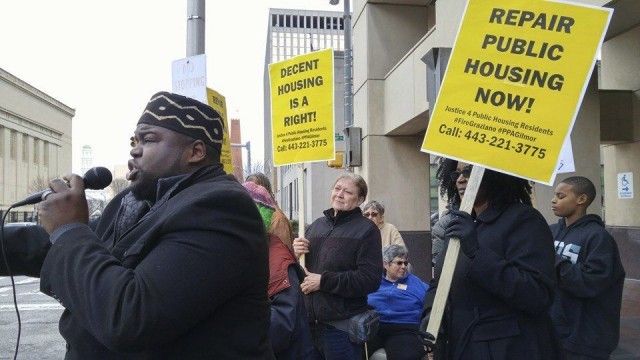 In September, women at the Gilmore Homes public housing complex began to publicly complain of regular sexual abuse by repair workers, criminal abuse that had gone on for several years. Residents had been forced to perform sexual acts in exchange for the necessary repairs. The housing commissioner, Paul T. Graziano, had been made aware of the situation several times and consistently failed to remove the abusers from their positions. In essence, he covered it up. The women banded together and filed a lawsuit against the Housing Authority seeking justice and an end to the years of sexual abuse.

The women who brought the lawsuit against the housing authority won a settlement on Jan. 8. The victims of the abuse will be awarded up to $8 million, depending on the number of victims that ultimately come forward.

Workers World Party and the Southern Christian Leadership Conference, in conjunction with the People’s Power Assembly, decided to launch their own investigation into public housing conditions in Baltimore. Activists went door to door in Gilmore Homes, asking residents about their experiences with public housing and the state of their homes with regard to repairs. What was found was horrific.

The very fact that repair workers had the sort of leverage required to demand sex for repairs, and the women desperate enough to be forced into it, speaks volumes about the prevailing conditions in public housing in Baltimore. At nearly every home, the story was virtually the same: The residents would report repairs that needed to be made and the management would practically ignore them. One woman reported not having working heat in her home for seven whole years, forcing her to attempt to heat her home with the oven: a dangerous solution born out of necessity! The terrible conditions that were seen also included broken windows, black mold growing uncontrolled, rodent and pest infestations, and severe water damage.

While the case of the woman without heat for her home was perhaps one of the most egregious cases of a violation of human dignity, all of these issues are chronic and by no means short term. Many residents said that their issues had gone on for months or even years, with not even an attempt to fix them made by the housing authority.

The incredible public response of the community combined with the outrageous conditions found in the housing complex have led the PPA to begin a campaign demanding justice for public housing residents.

Continuing the work of Dr. King

The year 2016 is an important year in the struggle for housing justice in the U.S., as it marks the 50th anniversary of the beginning of the Chicago Freedom Movement by Dr. Martin Luther King Jr. In 1966, Dr. King traveled to Chicago and, together with the Southern Christian Leadership Conference, began a struggle against slums and discrimination. The struggle there was instrumental in forcing the U.S. government to pass the 1968 Fair Housing Act, which ended legal segregation in housing based on race.

While the legal segregation of the mid-20th century has been defeated, national oppression and de facto segregation are still very much a reality throughout the country.

Baltimore is no exception. The slums of Baltimore, which include both private and public housing, make up a majority of the city and are inhabited overwhelmingly by people of color. Low-wage jobs and unemployment are the norm. The schools are underfunded and opportunities provided to young people are dwindling every year. This situation cannot continue.

Since the first visit to Gilmore Homes, teams of activists have visited many other public housing projects throughout Baltimore on a weekly basis, including McCullough Homes and Latrobe Homes. Activists are recording and compiling evidence of the horrible conditions that exist, while also organizing people in the housing projects to join the struggle.

All of this organization and data will be used to hold a People’s Tribunal in Baltimore in late February that will put the city itself on trial for these inhumane conditions. The tribunal will demand the firing of Commissioner Paul Graziano, the making of repairs in the public housing projects, as well as making affordable housing a right in Baltimore.