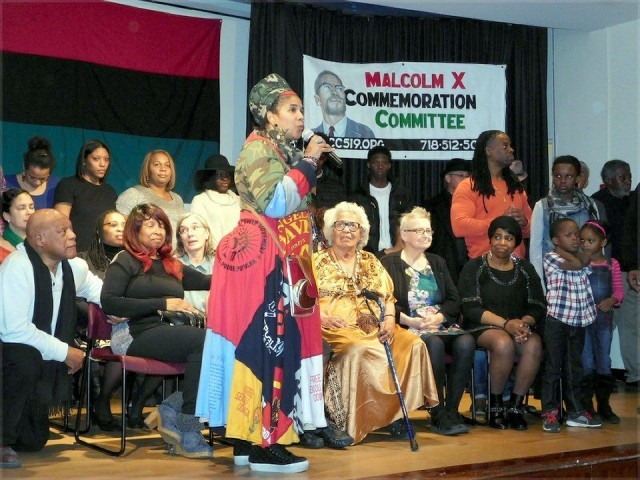 Several hundred people filled New York’s Martin Luther King Jr. Labor Center on Jan. 17 for the 20th Annual Dinner Tribute to the Families of our Political Prisoners/Prisoners of War. In this photo, Dequi Kioni-Sadiki, chair of the Malcolm X Commemoration Committee, which sponsored the dinner, speaks to these families and with some former political prisoners who were asked to the stage. She honors fallen political prisoners and especially Herman Ferguson, who, with partner Iyaluua Ferguson — pictured sitting with a cane — started these dinners to raise commissary funds and build support for political prisoners. To the right of Ferguson is former political prisoner Lynne Stewart.

Former political prisoner Sekou Odinga also spoke, telling of the repressive racist conditions behind the walls and offering ways that people could be supportive. For more information visit www.MXCC519.org and ‘like’ MXCC on Facebook.