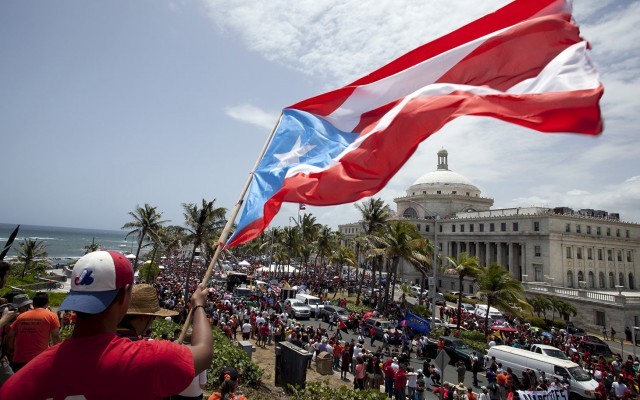 The year 2016 has just begun, and it already looks like one filled with political definitions for Puerto Rico. The huge public debt of $73 billion and its default remain the problem which the corporate news media focus on internationally. Even though Puerto Rico’s colonial government has cut essential services trying to pay that debt and has put the majority of Puerto Rican families in misery, the main center of attention and action in Puerto Rico is really elsewhere: in its political status.

For many years there has been discussion of this status and even referendums on it. Because these referendums were structured within a colonial state and imposed to a certain extent by the U.S. metropolis, they have actually been unlawful and meaningless. The current discussions, however, which are the result of the enormous crisis at all levels affecting the country, have legitimacy because only by defining Puerto Rico’s status can the people find the path to a real solution to this deep crisis.

After more than 117 years of a colonial process affecting even how we think and reason, even a patently obvious truth can be disguised and presented as its opposite. This has been the case in Puerto Rico. The classroom, radio, television and all spheres of social life have served as platforms used by the empire to transform the obvious reality that Puerto Rico is a colony. They instead disguise this colony as a country with autonomy and sovereignty.

This truth was precisely what Lolita Lebrón, Irving Flores, Andrés Figueroa Cordero and Rafael Cancel Miranda tried to expose to the world when they opened fire in the U.S. Congress on that March 1, 1954.

To hide from the international community its terrible role as the oppressor of a people — a truth which if exposed could retard the progress of its Cold War against the Soviet Union — the U.S. for decades pushed a false image of “Puerto Rican autonomy” through a Constitution in Puerto Rico that granted limited rights under a ridiculous euphemism — “Commonwealth” or “Free Associated State,” a concept in itself contradictory. As of 1953, the imperialists no longer accounted for their colony at meetings of the United Nations, since they presented Puerto Rico as a “nearly” sovereign country that had its own Puerto Rican governor elected by the people, not a Yankee nominated by Washington. The colony had been “perfumed,” and the U.S. could continue to exploit all the wealth it needed without any international objections.

That farce ended a few days ago when U.S. Attorney General Donald Verrilli Jr. clearly stated that the Commonwealth has no sovereignty. It is interesting that these statements came during a hearing where the attorney general appeared as a “friend of the court” before the United States Supreme Court in a case that has nothing to do with the island’s economic crisis. This itself illustrates the urgency of the status issue.

The case known as Puerto Rico v. Sánchez Valle is one involving double jeopardy. The subject was tried in U.S. courts for illegal possession and sales of weapons, and he now asserts that he cannot be prosecuted for the same offense in local Puerto Rican courts. The Puerto Rico Department of Justice, however, says it does have the power to charge people for the same crime because Puerto Rico has its own sovereignty. It has submitted the case to the U.S. Supreme Court.

Gov. Alejandro Garcia Padilla of the Popular Democratic Party, which is a proponent and advocate of the colonial Commonwealth, immediately responded to Verrilli with feigned indignation common to corrupt traitors of their own people. Were this not so tragic, it would be rich material for a comedy. Noting that the U.S. “changed its opinion,” the governor wrote that “the laws and the Constitution of the Commonwealth emanate from the power of the people of Puerto Rico in the exercise of their inherent right to organize themselves politically in their own government. The United States has also acknowledged this for decades before the international community.”

The Obama administration, however, through its Deputy Attorney General Nicole Saharsky, took a clear position at the Jan. 13 Supreme Court hearing when she said: “[First] Congress can, in fact, revise the current arrangement it has with Puerto Rico. That’s because Puerto Rico is a U.S. territory. The territories belong to the United States, which means they exist under U.S. sovereignty. And second, it is Congress that makes the rules.” (noticel.com, Jan. 14) In short, PR is owned by and not part of the U.S., and Washington can do whatever it wants through Congress.

A decision on the case is expected in the coming months.

This has great relevance now because as a result of a series of hearings in Congress on the crisis in Puerto Rico and the Puerto Rican government’s request for access to a bankruptcy law for debt restructuring, there is a congressional proposal to impose a so-called independent Federal Financial Control Board for financial oversight in Puerto Rico. This really would function as a junta to ensure payment to bondholders on Wall Street  — because it could act outside the island’s legal and governmental framework. A true colonial junta.

Response of the movement in PR

This situation is helping to increase unity within the independence movement. One example could be seen at the Puerto Rican Independence Party Assembly last month, where the PIP’s candidate for governor, Maria de Lourdes Santiago, currently a senator representing the same party, was announced. At that meeting, various parties, organizations and personalities on the left and in the liberation movement who are not affiliated with the PIP attended, which demonstrated they were growing closer and might create the consensus so necessary at this time for the struggle for independence.

Many individuals connected to the independence struggle have stated and demonstrated that this is the crucial year for sovereignty and independence. Indeed, never before have there been such perfect opportunities for facilitating broad and open discussion with the people about independence. It is imperative that a campaign of popular education be held on the need for self-determination and liberation from the imperialist yoke, which demonstrates that only independence, not statehood, is the only status that can guarantee a future of social and economic justice for the people. The debt crisis has been the great school that is helping to remove the colonial cloud cover imposed by the empire.

Oscar López Rivera, the political prisoner who has spent 34 years in Yankee prisons for fighting for independence, is playing a very important role. Recently he wrote from prison a message to the people that his daughter, Clarisa López, read at the celebration of his birthday on Jan. 6. In it, he urged the whole nation to unite to reject the payment of the debt and boycott it, calling also for the unity and cooperation of the independence movement in a joint struggle. (See workers.org for full text of letter)

Joubert-Ceci is a member of the recently formed Philadelphia-Camden Boricua Committee, which is composed of Puerto Ricans in the diaspora who are joining forces in the fight for the independence of Puerto Rico.