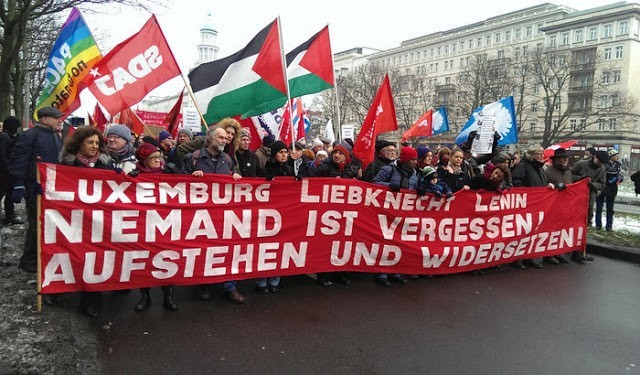 Jan. 11 — Despite the frost, there was no trace of coldness in Berlin on Sunday, Jan. 10, when more than 10,000 people in the capital commemorated Rosa Luxemburg and Karl Liebknecht, the murdered founders of the Communist Party of Germany (KPD). The large demonstration marched — despite near-freezing temperatures — in the morning for about one and a half hours through Berlin. It ended at the Memorial of the Socialists at the Friedrichsfelde Central Cemetery where, among others, Luxemburg and Liebknecht are honored.

Traditionally, red carnations are laid down in their memory. Left Party politicians also took part in the commemoration of the two revolutionaries. Around 9:30, members of the party leadership and parliamentary group laid a wreath at the tomb, including party chairs Bernd Riexinger and Katja Kipping and parliamentary group chairs Sahra Wagenknecht and Dietmar Bartsch.

Over 14,000 people participated in the Luxemburg-Liebknecht demonstration, according to organizers. Organizer Klaus Meinel informed Junge Welt that there were more people than last year. Among the demonstrators there was a consistently militant mood — although many of the mostly young protesters had likely participated in political festivities the night before, which traditionally take place on this date in Berlin. The weekend of the Rosa Luxemburg Conference of Junge Welt on Saturday and the following day’s march honoring the martyrs marks the start of the year’s political activities for many left-wing groups and parties.

The march was divided into blocs. Behind the lead banner – “Luxemburg, Liebknecht, Lenin: Nobody is forgotten! Stand up and resist!” – you could see flags of various organizations, including the Left Party and the Socialist German Workers Youth (SDAJ), but also of migrants’ organizations such as the DIDP youth. This was followed by a large group from the Marxist-Leninist Party of Germany (MLPD), an antifascist bloc, then internationalists, youth, and finally the German Communist Party (DKP).

The call for the demonstration was reminiscent of the anti-militarist attitude of Luxemburg and Liebknecht. It read: “In their spirit — with their clarity and energy — we demonstrate peacefully against wars and exploitation, for humanity and internationalism.”

The participation of German soldiers in the war in Syria, initiated by the Federal Government, and the deployment of Bundeswehr Tornados [fighter planes] were particularly criticized. Banners read: “International solidarity to fight German imperialism” and “Bundeswehr out of Syria!”

Throughout the day, people came to the memorial for Luxemburg and Liebknecht. Despite icy rain, the revolutionaries were honored in the afternoon by groups of visitors, even after the demonstration had ended.

At the turn of 1918-1919, Rosa Luxemburg and Karl Liebknecht founded the German Communist Party (KPD). Shortly after, both took part in the Spartacist Uprising. The revolutionary attempt was bloodily suppressed. Luxemburg and Liebknecht were captured by the right-wing Freikorps and murdered at the behest of Gustav Noske’s Social Democrats on Jan. 15, 1919.

This article from the German left daily Junge Welt was translated by WW Contributing Editor Greg Butterfield. The German original can be found at www.jungewelt.de/2016/01-11/001.php.