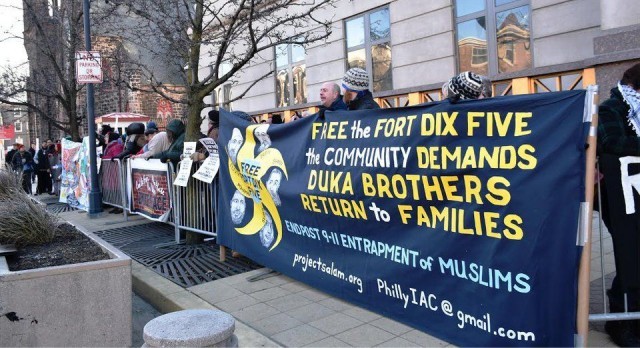 Camden, N.J. — The courtroom was packed. Despite 20 degree Fahrenheit weather, a rally outside the courthouse before the hearing started drew over one hundred loud, sign-carrying supporters. Most of the extensive press coverage before and after the hearings questioned whether the Fort Dix 5 should have been convicted.

But will the pressure from the community be enough to compel the judge to reverse course and rule in favor of justice for three of the defendants?

In 2008, five Muslim men, including three brothers, were entrapped in an FBI sting operation for allegedly plotting to attack the Fort Dix military base in New Jersey. In an atmosphere of Islamophobia fueled by ambitious politicians and sensationalist media headlines, the Duka brothers were convicted for a plot they literally had never heard of before their arrest. Eljvir, Dritan and Shain Duka received life sentences plus 30 years for their disputed role in a government-manufactured “conspiracy” to attack the military base 33 miles from Philadelphia.

The federal government paid two informants hundreds of thousands of dollars to entrap the men, who became known as the Fort Dix 5. Chris Christie, current New Jersey governor and U.S. presidential candidate, in 2008 was the U.S. attorney who prosecuted these defendants.

Eight years later, Islamophobia still pervades the media but opposition to it is more widespread. The Fort Dix Five Support Committee organized the Jan. 6 rally in front of the federal courthouse here. About 20 family members attended the rally and hearings.

Supporters traveled from Texas; New York; Maryland; Washington, D.C.; Pennsylvania; and Maine as well as New Jersey. Organizations present included Witness Against Torture; the National Coalition to Protect Civil Freedoms; The Aafia Foundation; the Philly Coalition for Racial, Economic And Legal Justice; Project SALAM; the Brandywine Peace Community; and the Catholic Worker Movement. The widespread support at the hearing showed that the Duka brothers are not alone.

Using agent provocateurs, government strategy over the last decade or so is to arrest people whom the FBI suspects “might” commit crimes. The government hopes to obtain convictions before any crimes actually occur. Since Sept. 11, 2001, there have been hundreds of unjustified arrests based on evidence unfairly concocted and/or twisted to convict innocent Muslims. Prosecutors have appealed to irrational fears of Islam — Islamophobia — to gain convictions, often based on the testimony of unethical FBI agent provocateurs or informants. Many more details can be found at projectsalam.org, where a database of these cases is kept.

Hearings limited to one narrow issue

On Dec. 28, 2011, the United States Court of Appeals for the Third Circuit refused to overturn the Dukas’ convictions. The Duka brothers consequently raised seven “ineffective assistance of counsel” claims in what are known as Section 2255 motions. U.S. District Judge Robert B. Kugler denied six of the motions but surprisingly ruled he would hold hearings (one for each Duka brother) limited to one issue: whether they had been denied their constitutional right to testify at their own trial. Kugler is the same judge who sentenced the three men to life in prison.

Mohamad Shnewer and Serdar Tartar, who were co-defendants with the Dukas at trial, are also separately pursuing Section 2255 hearings.

Attorneys Robert Boyle, Chad Edgar and Charles Swift represented the Duka brothers in the three separate hearings that day here in Camden. Each Duka brother testified under oath that their conspiracy convictions are flawed because their lawyers in 2008 wouldn’t let them testify at their trial. In explaining why he wanted to testify during the trial, Shain Duka stated, “The jury needed to hear from us, and we need the truth to come out, especially when you are innocent.” Attorneys Michael Huff, Troy Archie and Michael Riley all denied the charges against them.

Judge Kugler gave the attorneys until Feb. 16 to submit final documents. A decision will be made after that date, probably in March.

Shain Duka’s attorney, Robert Boyle, told Democracy Now! after the hearings: “Well, we’re hoping that the court rules in our favor on the narrow factual issue as to whether they were unconstitutionally deprived of their right to testify. If the court rules favorably on that, we’ll have another hearing where they will, in more detail, describe what they would have said had they testified at trial. If we prevail on that part of it, we’ll get a new trial.” (tinyurl.com/zoeyety)

No matter what Kugler’s ruling is, the Camden hearings revealed that there is a growing movement of people willing to oppose Islamophobia in all its manifestations, even in politically charged cases where the government falsely claims a terror threat.