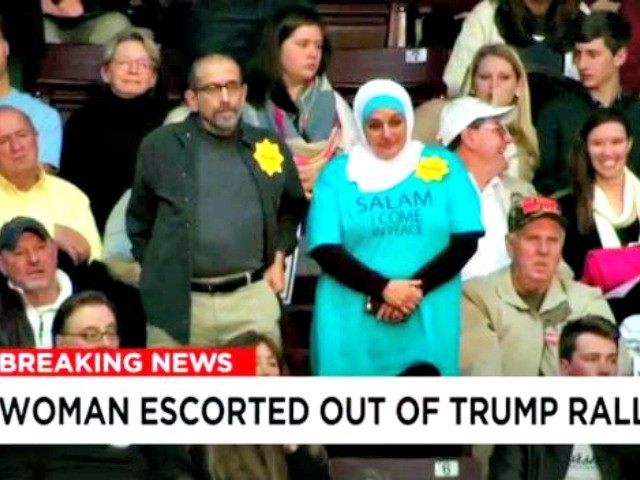 Rose Hamid, a 56-year-old flight attendant, rose up against Donald Trump’s Islamophobia at a Rock Hill, S.C., rally on Jan. 8.

Visible behind Trump in media coverage, Hamid wore a white hijab and a turquoise shirt emblazoned with “Salam, I come in peace.”

Hamid silently stood up in protest when Republican presidential candidate Trump made racist insinuations that Syrian refugees fleeing U.S.-instigated war were “terrorists.” Trump supporters began shouting at Hamid to leave, with one person saying, “Do you have a bomb?” She replied, “No. Do you?” (CNN, Jan. 9)

Hamid is president of Muslim Women of the Carolinas and supports the rights of the Palestinian people, a stand now being used to vilify her on social media.

Several protesters accompanying her also wore yellow, eight-pointed stars, a common symbol in the Islamic world. These bore the words “Muslim” or “Stop Islamophobia.” The yellow stars echoed the six-pointed badges that the Nazis forced Jews to wear during the European Holocaust. (Washington Post, Jan. 9)

Marty Rosenbluth, who wore this badge and stood next to Hamid, is a North Carolina pro-bono lawyer for immigrants and is Jewish. He has previously worked with the General Federation of Palestinian Trade Unions. (Indy Week, Jan. 2013)

At the rally, Trump called for a ban on all Syrian refugees in the U.S. He has previously floated proposals to create both a database of Muslims and a ban on Muslims entering the country.

Protests of Trump’s racism and Islamophobia have become more common and forceful since lone Black Lives Matter protester, Mercutio Southall Jr., was kicked and beaten by Trump supporters at a Birmingham, Ala., rally on Nov. 22.

During Trump’s Dec. 4 rally in Raleigh, N.C., activists from a statewide coalition constantly interrupted him. On Jan. 7, in Burlington, Vt., hecklers repeatedly disrupted Trump despite his staff asking in-line ticketholders if they supported Trump — and kicking out anyone who said, “No!”