The Arctic has been warming more rapidly than any other area on Earth. Since it is sparsely populated, with not much capitalist economic activity, not a whole lot of attention has been paid to this aspect of climate change. 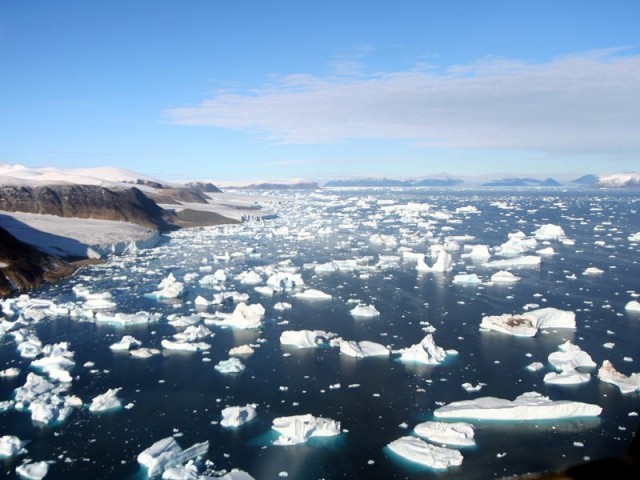 But when the North Pole was warmer than Chicago on Dec. 30, a host of news outlets from USA Today to Fox News decided to cover this phenomenon.

The same storm, which British meteorologists named Frank, brought torrential rain, flooding and tornadoes to the U.S. Midwest. When it hit the Atlantic, it turned north, punched through the jet stream between Iceland and Greenland, and dumped a very warm mass of air into the Arctic.

The temperature at the North Pole, according to Arctic News blog, was around 33 degrees Fahrenheit, about 50 degrees warmer than normal. It was quite an anomaly.

When the storm hit Iceland, it produced a huge pressure drop of 54 millibars in 18 hours. A “bomb” cyclone is defined as dropping 24 millibars in 24 hours, so Frank was even more drastic. Frank was among the five most powerful storms ever to hit Iceland, according to the National Oceanic and Atmospheric Administration.

Videos posted on Iceland Monitor showed rocks as large as basketballs being blown down the main road in eastern Iceland. It’s the only road.

The glacier melt from Greenland has created a layer of relatively colder fresh water in large areas of the North Atlantic that prevents the warmer water pushed into the Arctic Ocean by the Gulf Stream from losing heat to the atmosphere. Parts of the Arctic Ocean have seen big spikes on the order of 7 to 10 degrees Celsius in temperature. (Arctic News, methane blog)

In the blogs about warming and climate change in the Arctic, one theme that comes up from time to time is that scientists don’t understand the interaction of all the phenomena they are studying: how glacier melt affects sea currents, how currents affect the jet stream, how warmer land temperatures affect wind and its velocity.

They see huge dangers. Vanishing ice cover in the Arctic means it will absorb more solar energy — snow and ice reflect much of the energy that hits them. Since the Arctic Ocean is relatively shallow, less ice means more water interchange between upper and lower levels, which could release billions of tons of methane frozen on the bottom. Methane is a more potent greenhouse gas than carbon dioxide.

Most of the people living in the Arctic are Indigenous. They rely on harvesting marine mammals, fish, caribou and musk ox for a substantial part of their diet. How big this harvesting is varies from area to area, but nowhere is it insignificant. The only exception is Iceland, which has some industry — aluminum production — and commercial fishing and tourism.

Climate change can affect an abundance of resources. It can also affect the conditions needed to harvest those resources. For example, the Yupik people of St. Lawrence Island can’t use the currently too-thin ice surrounding their island to reach the seals and walruses that are still fairly abundant in order to harvest them.

Shell Oil spent over $7 billion exploring the Arctic and found that conditions there, even with more ice-free periods, are still too extreme to allow it to successfully extract oil.

An ice-free Arctic might allow more ship traffic. But Christian Haas, a researcher at York University in Toronto and a colleague with Environment Canada, did a study in 2015 which concluded, “Commercial traffic hasn’t really increased in the Northwest Passage at all.” (Washington Post, Sept. 10)

Indigenous people in the Arctic need economic development that offers them jobs, while preserving their access to traditional sustenance. Working people in the lower latitudes need to avoid disasters that would deleteriously affect the climate where they live.