Supporters of a Michigan political prisoner, the Rev. Edward Pinkney, continued their efforts unabated through the holiday season. Behind the walls of the infamous Marquette Prison, attacks by officials also were unrelenting against him. 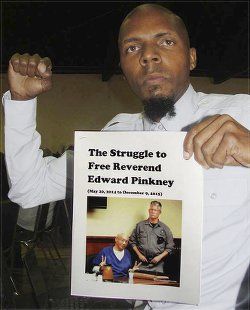 Forbidden to make phone calls for at least six months, Rev. Pinkney has been able to get out some reports of mistreatment through letters and a prison email system. Just before Christmas, corrections officers wrote up a misconduct “ticket,” charging Rev. Pinkney with having a Bible on his bed. This is another in a long line of “tickets” against him since his transfer to Marquette on Oct. 6. Three other charges were tossed out on appeal through the prison procedure, including a charge of “smuggling” in late November. Two other charges over phone usage were sustained even though no prison rules had been broken. These led to the cancelling of his phone usage.

Rev. Pinkney describes Marquette Prison as “a kind of concentration camp where prisoners … are assembled to be tortured.” He reports that “the violence is out of control. A fight broke out two beds from me in the black mold room where I am once again sleeping. One prisoner attacked another. It was a big mess. The correction officers pepper-sprayed the whole room and I got sick from the spray. This was after the attack. … The hatred of some of the correctional officers against Black prisoners is unbelievable.” (posted at bhbanco.org, Dec. 22) Rev. Pinkney has named one particular guard as hostile and aggressive against him — Officer Schretter — and has asked supporters to contact public officials about the mistreatment.

Concern for Rev. Pinkney’s safety has motivated phone call and letter campaigns. Michigan Gov. Rick Snyder and Michigan Department of Corrections Director Heidi Washington have been bombarded for the past month from concerned individuals across the country. Marquette’s warden, Robert Napel, has also been the recipient of numerous complaints.

A letter from the Detroit office of the American Civil Liberties Union cautioned Director Washington and Warden Napel that the ACLU is investigating the conditions Rev. Pinkney has complained of and that officials could be held legally liable for any official “indifference.”

Attorneys from the Constitutional Litigation Associates based in Detroit, in a letter sent Dec. 28, also let Warden RobertNapel know they are monitoring the situation. This group provided legal aid to Rev. Pinkney in prior cases going back to 2006.

Following the Emergency Conference to Save Rev. Pinkney held in Detroit on Dec. 12, members of the Michigan Emergency Committee Against War & Injustice (MECAWI.org) began contacting members of the state House and Senate seeking their intervention. Sens. Coleman Young Jr. and Bert Johnson, along with Rep. Rose Mary Robinson, expressed their concern, resulting in an official inquiry addressed to Rev. Pinkney from Keith Barber, legislative corrections ombudsman. Rev. Pinkney was able to reply to Barber, detailing the many threats and dangers he is facing.

Rev. Pinkney was buoyed with the recent filing of an amicus curiae brief by the Michigan state ACLU in support of his appeal against his unjust conviction in the fall of 2014. “The prosecution of Rev. Pinkney was effectively a penalty for his lawful exercise of his First Amendment right to engage in the political and civil life of his community,” the brief stated. “In addition, his trial was tainted by improper references to his controversial, but lawful, First Amendment activities.” (bhbanco.org) It is thought that many months may elapse before the Michigan Court of Appeals hears Rev. Pinkney’s appeal.

Supporters are urged to call and express their concern for Rev. Pinkney’s safety to Keith Barber, legislative corrections ombudsman, at 517- 373-8573.