The San Francisco Labor Council, a coalition of 150 unions representing over 100,000 workers in the Bay Area, spoke out against the Dec. 2 police murder of Mario Woods. In a resolution dated Dec. 14, the council calls for an investigation into Woods’ death and for the San Francisco district attorney to “prosecute the police who fired their guns to the fullest extent of the law, up to and including charging them with murder.” The resolution also notes that “use of deadly force by police officers against Black and Brown males is occurring regularly across our nation” and as a result “has made even minor interactions with law enforcement potentially life threatening.” (For resolution, see sflaborcouncil.org.)

After Netflix announced Aug. 4 that it would offer a year of paid parental leave for salaried employees (the highest such benefit in the country), three workers’ and women’s advocacy groups demanded Netflix expand coverage for maternity, paternity and adoptions to lower-paid hourly employees. Ultra Violet’s petition had nearly 50,000 signers. On Dec. 9, Netflix bowed to pressure and now offers streaming workers 16 weeks at full pay, 14 weeks for customer-service workers and 12 weeks for DVD-by-mail workers. To sign a new petition demanding Netflix offer all workers the same benefit, see weareultraviolet.org.

It’s criminal that out of 185 industrialized countries in the world, the U.S. and Papua New Guinea are the only ones without national paid parental leave! Since 1993, the U.S. offers only 12 weeks of unpaid leave for workers at companies with 50 or more employees. A tiny percentage of U.S. workers receive paid leave — at the discretion of private companies and in California and New Jersey.

On Jan. 1, the minimum wage in 14 states rose. The raises range from a nickel an hour in South Dakota to a full dollar in Alaska, Nebraska, California and Massachusetts. The last two states are the first ones with a $10 wage floor. Eight out of the 14 have a wage of $9 or more. The minimum wage is even higher in New York for fast food workers: $10.50 in New York City and $9.75 elsewhere in the state. The District of Columbia, Maryland, Minnesota and Nevada will raise their wage floors later in 2016. Due to broad popular support, 29 states now offer wages higher than the federal minimum of $7.25, set in 2009.

Many cities and counties — Seattle, Los Angeles, San Francisco and smaller West Coast cities — are gradually phasing in a $15 minimum wage. Several states and cities have $15 minimum wage laws for public sector and government-contract workers. Gov. Cuomo announced Nov. 10 that he would raise New York state workers’ wages to $15. (Huffington Post, Dec. 23) The ­struggle for $15 and a union continues! 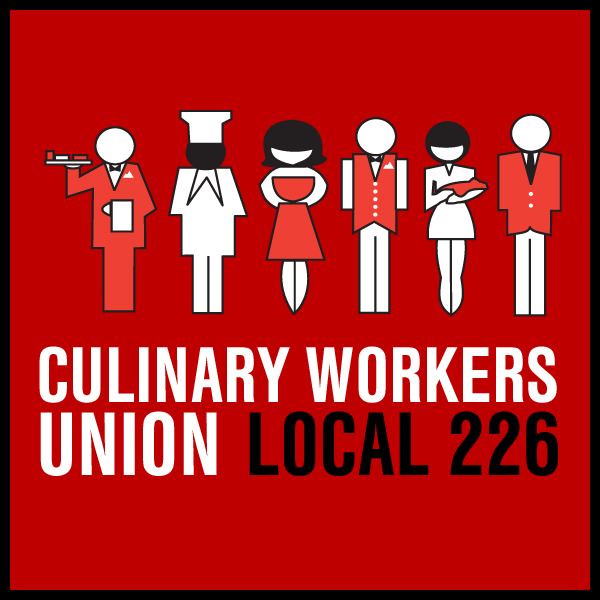 A majority of workers at the Trump International Hotel Las Vegas have voted “YES” to be represented by the Culinary Workers Union Local 226 and the Bartenders Union Local 165 of UNITE HERE.

Reactionary billionaire presidential hopeful Donald Trump mounted a legal challenge to the union drive at the Trump International Hotel in Las Vegas. A majority of the 500 workers voted Dec. 4-5 to join the Culinary Workers and Bartenders unions, both affiliates of UNITE HERE. Hotel management filed an objection to the election with the National Labor Relations Board on Dec. 14. While noting that Trump “insists on being treated fairly as he campaigns,” food service worker Jeffrey Wise said:

“I also want to be treated fairly. My coworkers and I participated in a democratic election process.” Statistics show that Trump workers make at least $3 less an hour than workers doing comparable jobs at unionized hotels in Las Vegas. (thinkprogress.com, Dec. 15)

This is the latest in a series of Trump attacks on the hotel workers, who are majority women and 80 percent Latino/a immigrants and people of color — two groups which Trump has viciously denigrated in his campaign. Hotel management was cited by the NLRB in 2014 for illegally suspending five workers for wearing union buttons at work and in August 2015 for illegal surveillance, intimidation and physical assault while trying to stop unionization.