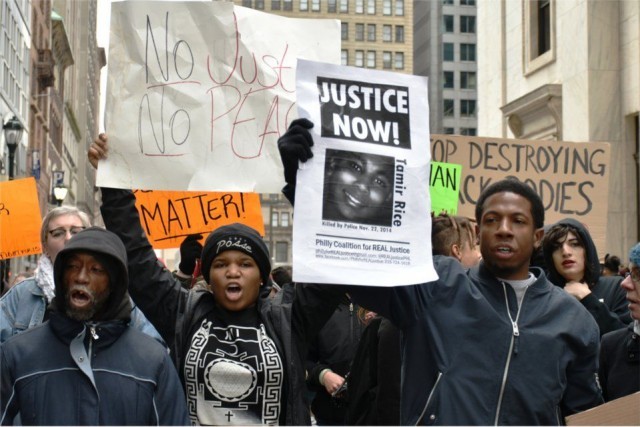 Calling for “no business as usual while police kill Black and Brown people daily,” the Philadelphia Coalition for R.E.A.L. (Racial, Economic and Legal) Justice led a protest at the 116th Mummers Parade, held annually in Philadelphia on New Year’s Day. Around 150 people took part in the action, called to bring attention to the police murders of more than 1,100 people in 2015.

After initially entering the parade at the start, then rallying near City Hall, where news media were concentrated, protesters marched to a point where they were able to breach police barricades and briefly stop the march. They then wove back through hostile spectators, used the underground subway concourse to regroup and resurfaced near City Hall for a final rally.

The annual Mummers Parade, featuring string bands, floats and elaborate outfits, might seem like Philadelphia’s version of Mardi Gras — except for the glaring exclusion of people of color.

Coalition organizer Erica Mines called the Mummers Parade “an in-your-face reminder of this city’s and this country’s racist double standard for people of color. When white people litter, drink and urinate in public, it’s ‘tradition.’ Meanwhile, prisons overflow with Black and Brown people jailed for nonviolent offenses. The mere suspicion of a petty crime is used to justify police murders of people of color.”

Philadelphia’s ordinance banning the public carrying of open beer containers is frequently used to arrest and fine people in communities of color. Yet it was fragrantly and repeatedly violated by Mummers and by the mainly white audience that showed up to watch the event. As early as 9 a.m. until well into the evening, everywhere one looked people carried open beer cans and liquor bottles, often while chatting with police.

Megan Malachi, an organizer of the protest and a member of Action Against Black Genocide, said, “The Mummers parade has historically been a racist, white parade.” As a child, her parents did not allow her to attend because of the racist attitudes exhibited by those marching or attending the event.

Throughout their 116-year history, the Mummers have demonstrated a consistently blatant pattern of racism; sexism; anti-lesbian, gay, bisexual, transgender and queer bigotry; and ridicule of immigrants. For decades — until protests by African-American communities threatened to permanently end the event in the early 1960s — white, mainly male Mummers strutted in public in blackface, often in women’s clothing. Another protest by women in 1972 targeted the blatant sexism.

In response to mounting criticism, this year’s event was supposed to be “more diverse.” A limited number of Black, Latino/a and LGBTQ brigades were invited to participate. However, most were scheduled in the early hours of the parade, when few spectators were on hand to watch. Despite this alleged inclusiveness, several of the Mummer’s brigades continued to use stereotypes to mock the people they historically excluded.

And despite agreements with the city 50 years ago to end these insulting practices, a year ago, on Jan. 1, 2015, Mummers in blackface carried signs mocking the Black Lives Matter movement. This same racist mockery was evident again this year.

Members of the Sammar Strutters, including children, appeared in brownface dressed as Mexican stereotypes. Another brigade marched in costumes that bore a disturbing similarity to the Ku Klux Klan’s pointed white hoods.

In a separate incident, a gay man out walking his dog with friends was attacked by a group of drunken Mummers, who punched him in the face and yelled anti-gay slurs before retreating into the crowd.

Yet the only people that police arrested were two Black activists from the groups protesting the racist and anti-LGBTQ parade. Police made no effort to stop the Mummers and their supporters who spat on demonstrators, called them the n-word, and threw bottles and cans at them.

In addition to signs and chants against police brutality, protesters addressed city, state and national policies that continue to target immigrants and refugees; the serious underfunding of Philadelphia public schools; gentrification; U.S. military actions in the Middle East; environmental concerns; and the fight for a $15-an-hour minimum wage. Philadelphia’s SugarHouse Casino, long a focus of the pro-union, low-wage workers struggle, was the major sponsor of this year’s Mummers’ parade.

“This parade has gone on far too long,” said coalition organizer Erica Mines, speaking at the protesters’ closing rally near City Hall. “Even these new ‘multicultural’ divisions, added in an effort to include more minorities in the parade, are too little, too late. The Mummers, as a historic institution, has done nothing but make a mockery of minorities. It’s a slap in the face. We are not in the 1950s.”

Without this protest, it’s unlikely that several news sources would have come out against the blatant racism of this event. Even Philadelphia’s mayor-elect, Jim Kenney, was forced to tweet against the attacks on the trans* community. Several news outlets covered the protest. An editorial by the independent online Philadelphia Declaration was headlined, “These Mummers Cannot be Reformed.” (phillydeclaration.org, Jan. 2)