The third and final day for Mumia Abu-Jamal’s lawsuit against the Pennsylvania Department of Corrections ended on Dec. 23 with the jaw-dropping revelation that the lawyer representing the DOC had knowingly introduced false evidence. In this case, the DOC is the defendant. 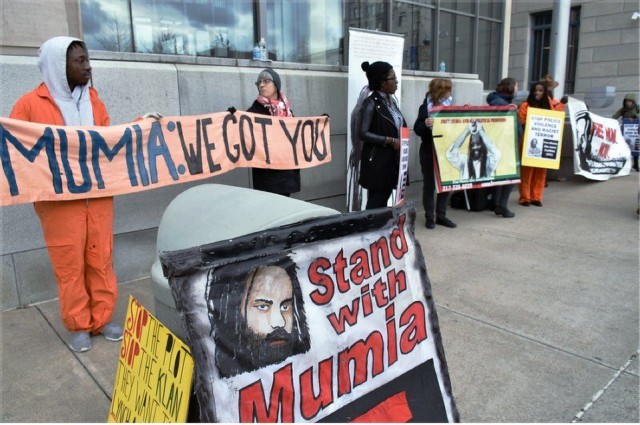 The case involves Abu-Jamal’s charges of medical misconduct and negligence against the DOC and his request for anti-viral medications to cure his hepatitis C.  The hearing was held before 3rd Circuit Federal District Court Judge Robert Mariani in Scranton, Pa.

This hearing’s resolution holds tremendous potential for the thousands of prisoners suffering from untreated but curable Hep C.  To put these numbers in perspective — while 1 percent of the general population has the Hep C virus, for prisoners the number is closer to 17 percent.

The major shocker came as Abu-Jamal’s lead attorney, Robert Boyle, cross-examined Dr. Paul Noel, chief medical officer of the Pennsylvania DOC.  Boyle asked Noel to confirm that it was his affidavit that DOC attorney Laura Neal had introduced into evidence.

Under oath, Noel responded, “No.” He explained that while the document bore his signature it was not the affidavit he had signed. He said it contained a paragraph that he had instructed Neal to omit. Noel testified that he told Neal on multiple occasions that the inserted paragraph was incorrect.

In September 2015, this same altered affidavit was the key piece of “evidence” used by a Pennsylvania magistrate judge to deny a hearing for Abu-Jamal’s case.

Attorney Neal had knowingly tampered with the evidence by including an erroneous statement that Abu-Jamal’s low hepatitis C viral load level meant he would not sicken for many years. Most hepatitis C experts agree that a patient’s viral load has nothing to do with the progression of the disease.

As Neal stumbled with excuses that the information was factually correct, Dr. Noel replied, “But misleading and false in its conclusions.”  At this point, Judge Mariani cautioned Neal that she was at risk of “impeaching her own witness.”

Dr. Noel acknowledged that another paragraph in his affidavit was also false. This one stated that Dr. Ramon Gadea, the only infectious disease specialist to examine Mumia, “ruled out hepatitis C as a cause for Abu-Jamal’s extreme skin eruptions.” On the contrary, Gadea’s discharge orders for Abu-Jamal following a Sept. 9 consultation stated that hepatitis C could be a secondary cause of the severe skin rash Abu-Jamal still suffered from.  Gadea recommended that Hep C should be treated after ruling out a rheumatoid condition.

After first stating that “it was anything but clear” that Abu-Jamal should get treatment, Noel finally agreed with Boyle that Abu-Jamal’s baseline tests for key Hep C indicators were grounds for his receiving the anti-viral cure.  Abu-Jamal already has significant fibrosis (scarring of the liver); anemia of chronic disease; low blood platelets; a severe extrahepatic skin condition; and a 63 percent chance of having cirrhosis of the liver.

The DOC has stalled in treating Abu-Jamal and thousands of other prisoners in Pennsylvania’s prisons with active hepatitis C and claims that first it needs protocols to prioritize which prisoners would be sick enough to get the costly anti-viral drugs.

Attorney Neal made another blunder by attempting to insert the DOC’s new Hep C “interim protocol” into evidence.  Claiming that the document had to be kept from public view, Neal insisted that Abu-Jamal’s attorneys sign confidentiality agreements not to disclose its contents. They refused.

Before court on the final day, the DOC attorneys again tried to pressure Boyle and co-counsel Bret Grote to sign.  Both refused, aware that Prison Radio had already filed a request to view the document under Pennsylvania’s “Right to Know” policy.

These protocols contain a number of barriers that inmates with chronic hepatitis C have to get through to even be considered for treatment.  Yet nothing in the protocols appears to mandate use of the new life-saving anti-viral drugs.

The final hurdle to get “consideration for treatment for Hep C” requires an endoscopy of the throat.  Even then, the only inmates who might be treated must have an immediate risk of “blood vessels bursting in their throats.” Prisoners might be considered “sick enough to treat for Hep C” if they demonstrate “esophageal varices with a raised portal pressure” as proof of liver cirrhosis. In other words, the sick prisoners must be near death to get this care.

Dr. Noel testified that under the new protocols only five out of an estimated 5,000 prisoners with chronic Hep C were being treated with the new anti-viral drug: 0.1 percent.  The number of prisoners treated dropped from around 20 under the 2013 treatment protocol using Interferon. During the 22 months while the new protocols were being developed, no prisoner was treated for Hep C.

Two anti-viral drugs, Sovaldi and Harvoni, have a 90 percent to 95 percent cure rate for chronic hepatitis C.  Gilead Sciences, which controls the sale of these drugs, has priced them at $84,000 and $94,500 respectively.

The latest guidelines from the American Association for the Study of Liver Disease and the Center for Disease Control recommend that all chronic Hep C patients be given the anti-viral drugs without regard to severity of symptoms.  Despite the recommendations from these reputable health specialists, Dr. Jay Cowan, whose company, Correctional Medical Associates, oversees medical care in Pennsylvania prisons, testified that the DOC was justified in using their “risk stratification” policy to treat only the sickest patients — those most likely to die without the drugs.

CMA is a subsidiary of Corizon Health, the country’s largest for-profit medical services provider for prisons, jails and other detention facilities.  The deaths of hundreds of  prisoners under their care has resulted in numerous lawsuits against Corizon.

Under cross-examination, Boyle asked Cowan to consider, if he had a patient in his private practice with significant chance of liver fibrosis, “would you treat the patient with the new anti-viral direct acting drugs?”

In evidence submitted to the court, Abu-Jamal’s attorneys noted that the cost of treating Abu-Jamal’s skin rash stemming from untreated Hep C was over $160,000. That is, it would have been less expensive to treat earlier with the anti-viral drugs.

Judge Mariani’s ruling is not expected for at least six weeks. During that time, the court has to produce written trial transcripts, and the attorneys on both sides will submit written briefs for the judge to review.  There will be no additional hearings in Scranton. Mariani’s ruling can also be appealed by either party involved.

At the end of the very tumultuous final session, Dr. Joe Harris, the former Black Panther Party member and hepatitis C expert who has served as a medical consultant for Abu-Jamal, said, “This was a Brown v. Topeka [Board of Education] landmark moment for all prisoners suffering from Hep C.”