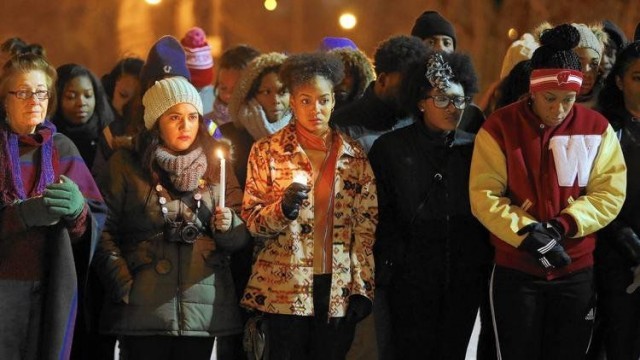 Chicago, Dec. 30 — Police here shot and killed Quintonio LeGreir, 19, a college student home on break from Northern Illinois University, and Bettie Jones, a downstairs neighbor, on Dec. 26. Jones was 55, the mother of five and a community activist in the organization Action Now. Both victims are Black.

The police statement reads, “The 55 year old female victim was accidentally struck and tragically killed … deepest condolences to the victim’s family and friends.”

LeGreir’s mother told Chicago station WBBM her son was an honor student in college and high school, who suffered some emotional problems.  “Seven bullets were put in my son, seven. Eight shots were fired. One hit an innocent lady who was just opening her door. Something is wrong with this picture.”

Residents at the scene said police could have used a stun gun or other nonlethal means to subdue LeGrier. Jones just opened her door, waiting for police to respond, then was shot along with LeGrier.

A vigil was held in support of Jones’ family on Dec. 29, bringing together neighbors and community members questioning this unnecessary killing. Friends and relatives of LeGrier wrapped blue and white balloons around a basketball goal during a candlelight vigil across the street from the high school from which he graduated.

Meanwhile, protesters marched in front of Mayor Emanuel’s home. They held him responsible for the recent rash of police murders and the city’s cover-ups. The call for his resignation has been getting louder and louder and includes a demonstration at City Hall set for Dec 31.

Following the double killing, Emanuel cut short his family vacation and returned to Chicago. He issued a statement calling for a review of the shootings by the Independent Police Review Authority. But, according to the Better Government Association, the IPRA has investigated nearly 400 police shootings since 2007 and found only one to be unjustified.

Several demonstrators were taken in ambulances to the hospital after falling in the snow on the unshoveled sidewalk in front of Emanuel’s home. Will Emanuel be ticketed and charged for unshoveled walkways? Others in Chicago now face a fine, recently increased from $50 to $500.

A wrongful death lawsuit was filed Dec. 28 on behalf of Quintonio LeGrier. The lawsuit says LeGrier never had a weapon and did nothing to suggest he was a threat before police opened fire. The civil suit also alleges police forced his father to go immediately to a police station to answer questions, even while his son was dying.

The suit states there is a video of at least some of the incident as it unfolded. One of the eight shots fired hit LeGrier in the buttocks, indicating he had his back turned to police.

Meanwhile, Jason Van Dyke, the officer charged with first-degree murder in the shooting death of Laquan McDonald entered a not-guilty plea at his arraignment on Dec. 29. His lawyer is asking for a change of venue, claiming Van Dyke cannot get a fair trial in the Chicago area. But the family is asking that the entire trial be televised to hold public officials accountable to the people of Chicago.

There is an atmosphere in the city of the “people versus the police” and a challenge to the cops’ technique of acting at will with violence and impunity. Well-known Chicago activist Mike Siviwe Elliott was arrested early in Dec. 29 while exercising his right to observe and video an officer who was getting rough with a young woman on a commuter train.

When Elliott pulled back his hand from the officer trying to snatch his phone, he was accused of assaulting the officer and placed under arrest. His phone has been turned over to State’s Attorney Alvarez. Elliott’s press statement said, “My arrest is further evidence that the police here are not being held accountable on any level,” and it is part of “a violent backlash to the countless nonviolent protests and demands of Chicago activists for justice and police accountability.”

People of Chicago are demanding an end to police murders and government cover-ups. They are building coalitions around the city to end police killing of Black and Brown youth. A true people’s tribunal is needed to build unity and expose the real role of the police in Chicago and around the country.

The cops’ role is to protect the private property of the rich from the masses through racism and state repression. On Feb. 20, a meeting at the United Electrical Workers Hall at 37 S. Ashland in Chicago is scheduled. Speakers will address building a movement to stop police terror in our cities. The movement will fight for the freedom of political prisoners, including Mumia Abdul-Jamal in Pennsylvania and Rev. Pinkney in Michigan. For more information contact www.facebook.com/Chicago WWP.