“Who will take care of them? That is my question.” Tran Thi Hoan posed this on World Human Rights Day, Dec. 10. This computer science professional from Central Vietnam is touring the U.S. with a delegation from the Vietnam Association for Victims of Agent Orange/Dioxin. She spoke at a meeting at the Martin Luther King Jr. Labor Center 1199. 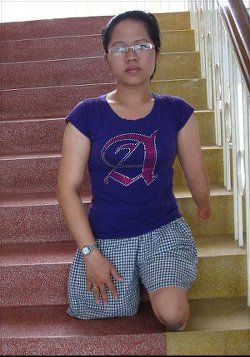 VAVA is a mass organization in Vietnam with over 300,000 members working to raise awareness and gain necessary assistance for the Vietnamese people suffering the effects of Agent Orange/dioxin exposure during and since the U.S. used it in its unsuccessful war to destroy the country. Exposure has caused illnesses or birth defects in an estimated 3 million Vietnamese; some 50,000 have been born with birth defects that are often staggering in their severity.

Agent Orange/dioxin is bitterly referred to as “the gift that keeps on giving.” It is a group of chemical herbicides given innocuous names like “orange,” “blue” and “yellow” that contain the long-lasting contaminant dioxin. The herbicide was produced in this formulation by Dow and Monsanto, the U.S. corporate criminals who profited handsomely from selling it to the U.S. military.

Between 1961 and 1971 the Pentagon used planes and helicopters to spray an estimated 20 million gallons of the herbicide (mixed at up to 13 times the recommended concentration) to destroy the lush rural landscape of south and central Vietnam where the majority of the population of this agricultural nation lived. Besides destroying the land for future agricultural use, the forests for harvesting forest products, and the rivers and ponds for aquaculture, the herbicide made direct contact with between 2 million and 5 million Vietnamese people.

The horror continued long past the end of the spraying program. Today 27 of the original 28 areas originally designated as hot spots for dangerous levels of toxicity are still toxic; only one has been remediated by the U.S. Dioxin remains in the food chain and natural environment so even the fish are too toxic to eat. People living in these extensive areas of contamination continue to be exposed to it every day.

The profound and long-lasting cruelty of this weapon continues to plague the people of Vietnam as well as its neighbors in Laos and Cambodia. Those exposed during the war experienced significantly elevated rates of particular cancers and chronic health problems. It didn’t stop there. Agent Orange/dioxin exposure increased chances of miscarriages and of giving birth to profoundly disabled children when one or the other parent had been exposed.

Today there are second and third generations of children suffering the effects of Agent Orange/dioxin from the ongoing exposure of their parents to contaminated food, water and soil. (Other adults and children are maimed by unexploded ordnance buried in the fields and forests of Vietnam, Laos and Cambodia.)

So this is the meaning of Tran’s question: “Who will take care of them?” She is deeply troubled about the future of very disabled children and adults totally dependent on family members who are now in their advanced years and are dying. What will happen when these caregivers are no longer there?

Vietnam is still a very poor country. The extraordinarily large number of people who are ill and disabled from the effects of the war is a heavy burden falling mostly on family members. VAVA and friends in other countries have provided millions of dollars to help, but that is not enough to meet the tremendous need.

Tran’s story is itself remarkable. Her mother was a peasant farmer who had been exposed to Agent Orange/dioxin in Central Vietnam. Tran attended school in her village for a few years but eventually stopped because of her disabilities. Her father was determined that she should continue and was able to move her to Peace Village II, where many children with Agent Orange live. She continued her schooling and is now a college graduate, fluent in English, and working as a computer professional in Tu Du Hospital in Ho Chi Minh City.

Tran is an attractive, vivacious and inspiring young fighter working on behalf of fellow Agent Orange/dioxin victims. She has accomplished all this despite having been born without legs and with one atrophied hand. She sees herself as one of the “fortunate” victims. She is reputed to be a terror navigating Ho Chi Minh City traffic on a moped!

Who will take care of them? The U.S. signed the Paris Peace Accords in 1973, which eventually led to the humiliatingly hasty withdrawal of U.S. forces in 1975. Despite having agreed to “help heal the wounds of war” in this agreement, the U.S. has done little to fulfill its ­commitment.

Instead, Washington has continued sowing these human disasters in country after country as it wages wars for profit and domination. It has left behind horrible chemical legacies of depleted uranium, part of its arsenal in the post-Vietnam world, as it willingly inflicts lingering damage on the peoples it cannot succeed in crushing. Even its own soldiers have been poisoned and carry the legacy home to their families.