American Airlines customer service agents celebrated the ratification of their first union contract Nov. 30, after unionizing in 2014 with the CWA/IBT Passenger Service Employees (a joint local of the Communication Workers and the Teamsters) after a 19-year struggle. The contract grants the airline’s nearly 15,000 agents both the highest wages in the industry and the largest one-time raise in industry history, which the workers will see in their paychecks on Dec. 24. Benefits will be extended to some 3,500 workers who previously earned none. Some 1,200 ticket counter positions, currently held by outsourced private contractors, will be made union jobs. (American-Agents.org)

Bargaining committee member Ken Grunwald noted that for many workers the contract “was far more meaningful than I could have ever imagined. Many members called to tearfully explain that the wage increase alone would impact their lives in an overwhelmingly positive way. [Their lives] will be improved dramatically.” To enforce the contract, especially the job security terms, the union plans to build a strong steward network. (CWA-union.org, Dec. 3) 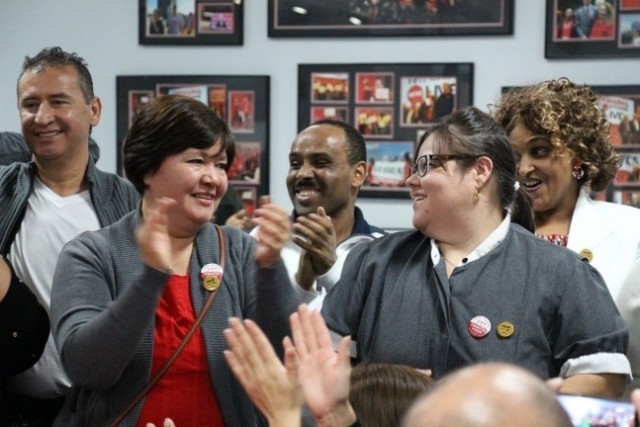 A majority of the 500 workers at the Trump International Hotel in Las Vegas, most of whom are Spanish-speaking immigrants, voted Dec. 4-5 to join UNITE HERE’s Culinary Workers Local 226 and Bartenders Local 165. A powerful video posted on CulinaryUnion226.org shows a sea of workers countering Trump’s attacks on immigrants: “If you want to make America great again, start here in Las Vegas with the workers at your hotel!” said Geoconda Arguello-Kline, secretary-treasurer of Local 226. (Sept. 23) On Dec. 7, she called on hotel management to “negotiate a contract as soon as possible.” The workers will bargain for fair wages, benefits and job security.

Workers at the Trump Hotel in Toronto, Canada, who won union representation with UNITE HERE Local 75 in April and ratified their first contract in December, joined a protest of Trump’s rabid Islamophobia on Dec. 11. Dozens of workers and supporters gathered outside the hotel, holding signs and leading chants declaring Trump’s bigotry “Not welcome in Toronto!” The union’s Facebook page states: “There’s no room in Toronto for anti-Muslim bigotry. We are standing up for equality, openness and inclusion!” (UniteHereLocal75, Dec. 12)

On the National Day in Solidarity with Planned Parenthood, Dec. 5, President Mary Kay Henry of the Service Employees union, which lost 10 members in the San Bernardino, Calif., shooting on Dec. 2 (four were injured), posted this statement on her Facebook page: “Today I carried SEIU members in my heart to stand in vigil and solidarity with Planned Parenthood over the lives we’ve lost to senseless violence.”

She continued: “Our members — public health stewards — who lost their lives and were injured in #SanBernardino act out of the same love and commitment as the healthcare providers in Planned Parenthood health centers. Planned Parenthood and SEIU will stand stronger together today and every day forward till we end violence in all its forms in our workplaces and in our communities.”

About 2,200 members of Transit Workers Local 100 in New York City — bus operators in the Bronx and Queens, as well as maintainers and their helpers, cleaner helpers, stock workers and their assistants — ratified a new contract overwhelmingly on Nov. 24. They won raises every year, including retroactive payments, and vastly improved pension benefits, which will now have parity with those of Transit Authority subway workers and Operating Authority bus operators in Manhattan.

TWU 100 President John Samuelsen said: “As with the TA/OA agreement [signed May 19, 2014], we beat the pattern set in City bargaining with every public sector union by a significant amount. … Every other NYC public sector union accepted zeros; we did not. We also secured a series of important new health, safety and family-friendly benefits, … [including] lifetime spousal medical coverage and first time ever two weeks’ paid paternity and maternity leave.” After apologizing for past inequities in MTA Bus pension benefits, he added, “We now march forward in unity and strength, pursuing across the board parity with [other NYC transit workers].” (twulocal100.org, Nov. 24)