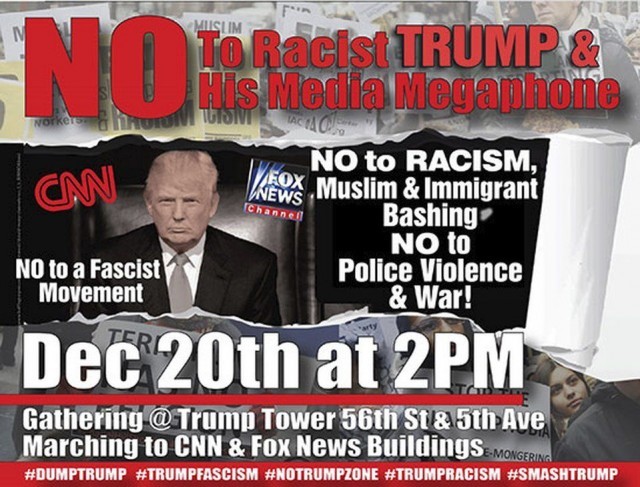 Donald Trump’s call to ban Muslims from entering the country is only the latest outrageous example of his racism. The time has come for us to come together and say ENOUGH!

Our outrage over the racism that is polluting the media must be galvanized into mass mobilization, so the world can see that progressive people in the U.S. will not tolerate racism. We will not allow Paris or San Bernardino to be used as an excuse for racism, repression and war.

We can no longer dismiss Donald Trump as little more than a reality show performer parading as a candidate, whom no one need take seriously.  And even though Trump is a candidate, the election campaign is merely a pretext for his real mission.

Trump is providing an invaluable service to the 1%.  At a time when a spiraling global economic crises is pauperizing those who until recently thought of themselves as middle class, Trump is testing how far the powers that be can go in  redirecting growing anger and fear away from Wall St. and against Muslims, immigrants, and Black and Brown people.

Moreover, Trump is helping to lay the basis for an intensification of the war against people of color. That war includes, but is in no way limited to, racial profiling, murder and brutality at the hand of the police and even greater mass deportations, mass incarceration, war and occupation.

The danger is not only with Trump. Other politicians are using Trump as a stalking horse. They can condemn Trump for calling for a ban on allowing Muslims into the country, while at the same time advocating with greater urgency their own proposal to ban Syrian refugees and proposals that amount to expanding profiling, surveillance and repression.

This is an urgent time to bring together all those who fight for justice and human rights in a powerful show of unity and solidarity in this country.

On December 20 let’s join together and say ENOUGH!

NO to TRUMP & His Media Megaphone!

NO to Racism, Muslim & Immigrant Bashing!

NO to Police Violence & War!

NO to a Fascist Movement!