Marks Farms management had called the cops on employees meeting during their free time with the Workers Center of Central New York. On Sept. 1, the farm fired two workers who were alerting co-workers to their right to have visitors meet with them in their lodgings, under U.S. Department of Labor policy. Many of the workers are undocumented immigrants. 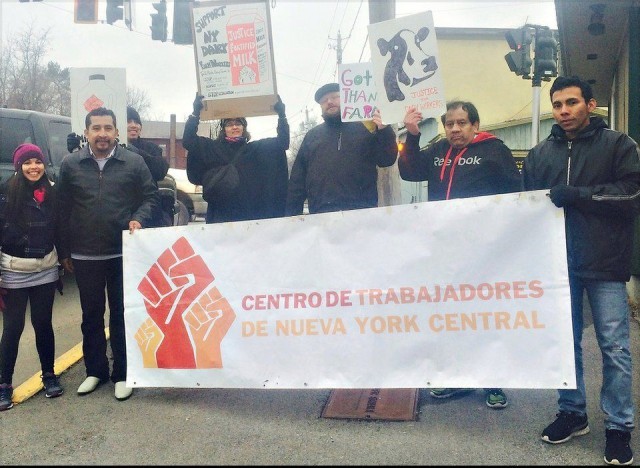 At a “Rally for Dignity and Respect” at the farm, workers presented management with a petition of over 1,000 names backing demands that Marks Farms stop all violence and verbal abuse against farmworkers, respect the right of workers to receive visitors in their homes and stop retaliation against workers who are organizing to improve workplace conditions.

Speaking in Spanish at the protest, the fired workers said, “Treat us like human beings, not like slaves or like the cows!” and “That’s why [Marks Farm] has everything. It’s from the hands of the workers.”

“They make $28 million a year, they say very proudly,” said Rebecca Fuentes of the WC-CNY. “They are king in Lewis County, they say. Now we want justice to be king here too.”

After the farm rally, the 25-person contingent of workers and supporters marched through the small downtown of Lowville, clanging cowbells and chanting: “Marks Farms, ¡escucha! ¡Estamos en la lucha!” (Marks Farms, listen up! We are in the struggle!)

Continuing to chant, “¡El pueblo unido jamás será vencido!” (“The people united will never be defeated”), they were greeted with some approving horn blasts and thumbs-up. Several local passersby and drivers asked for more information and fliers. For more on the dairy workers’ struggle, go to: workerscentercny.org.