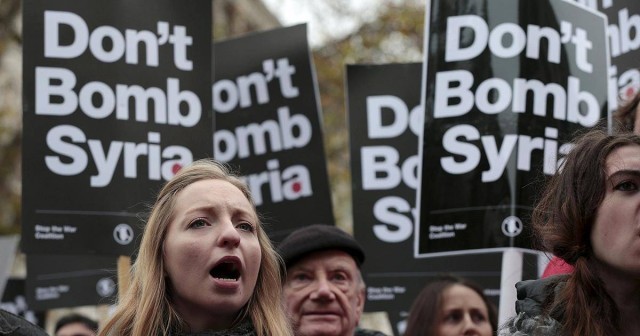 Dec. 6 — Thousands of people marched in England, Spain and Germany in the last eight days to try to stop their governments from joining the U.S. war against Syria. Despite these protests, both the German and the British parliaments voted to send troops and aircraft to the region to join the bombing campaign.

Just as the U.S. is using the Paris attack last month, and now the San Bernardino, Calif., assault, to motivate its continued military campaign against “terror,” so too have these junior partners jumped in to get their share of the spoils of war. Though only the Islamic State is named as a target, the military moves will prolong and deepen the war against Syria, not stop it.

The Syrian people will suffer even more from this military escalation. Already 250,000 have died and 10 million have been displaced from their homes.

On Nov. 29, some 5,000 anti-war protesters took to the streets in London, carrying signs that read, “Don’t bomb Syria” and “Drop Cameron, not bombs.” Then, on Dec. 2, thousands more marched in front of Parliament demanding that the ministers vote down Prime Minister David Cameron’s proposal to join the U.S. and France with airstrikes in Syria.

The vote by a large minority of some 60 Labour Party members for war displayed the fractures within that party on this issue. The London Labour councilor, Darren Hackett, described the anti-war portion of the party as “scum.” (theguardian.com, Dec. 2)

One of Labour’s anti-war shadow cabinet members, Diane Abbot, addressed the anti-war crowd outside Parliament: “In 24 hours, British bombers could be bombing Raqqa. It will be a tragedy. It will not keep the British people safer and will bring forward a further spiral of violence in the region.”

Sure enough, the British military began daily bombing raids in northern Syria even as the vote was taken. A year earlier, Cameron couldn’t push a pro-war vote through Parliament.

In Madrid, 5,000 anti-war marchers, chanting “No to war!” and “Not in our name!” protested outside of the Reina Sofía museum on Nov. 28. They forced the rightist Popular Party prime minister, Mariano Rajoy, to “hold off any decision” on joining the U.S. war campaign. (Aljazeera.com, Nov. 28)

Anti-war protests also erupted in more than two dozen cities in Germany, where the Bundestag voted to send the German military to join the U.S. war. Some 3,000 marched and rallied at the Brandenburg Gate in Berlin. The opposition Left Party in Germany instead proposed that German arms exports going to ISIS-supporting countries like Saudi Arabia, Qatar and Turkey be stopped. (jungewelt.de, Dec. 4)

The German military will supply reconnaissance jets and plans to send 1,200 more soldiers to the region, where already 100 are currently in Iraq as “trainers.”

Recently exposed by Russia for its leaders pocketing huge profits by selling ISIS oil, Turkey’s government sent troops and some 25 tanks into northern Iraq, with the bizarre explanation that this is a “training mission.” Iraq’s government protested and demanded that Turkey withdraw its military from Iraqi territory.

There are signs that the U.S.-led coalition intends to widen the war by having its “coalition” attack Libya, a country devastated by war since the U.S.-arranged torture and murder of President Moammar Gadhafi in 2011. The U.S. is already launching its dreaded drone strikes in Libya, and now French reconnaissance planes are eying the town of Sirte for their next bombing campaign. (theguardian.com, Dec. 5)

This widening war in the Middle East and West Asia is wreaking death and destruction throughout the area and only benefits the giant oil monopolies that thrive from the vast wealth of the region, wealth that is denied to the millions of people who live there.