Detroit — “What goes around comes around” is a popular saying that suggests, one way or another, we all pay for our misdeeds. That isn’t always true, however, especially for the many thousands of victims of police brutality. From Ferguson, Mo., to New York to Cleveland, racist police literally get away with murder.

Thus it was a huge victory on Nov. 19 for Detroit autoworker Floyd Dent and the Black Lives Matter movement when the perpetrator of Dent’s near-fatal beating — suburban Inkster, Mich., cop William Melendez — was found guilty of assault and misconduct by a jury. He was immediately remanded to jail after the conviction. The two felony charges carried a combined maximum sentence of 15 years. The sentencing has been postponed until February.

This victory follows a civil jury award of $1.4 million to Dent; earlier charges of drug possession, assault and resisting arrest were dropped. Dent, a 57-year-old Ford worker with 37 years of corporate service, was stopped by Inkster police last Jan. 28. Inkster, a suburb of Detroit, is 73 percent African American, but the police force is 80 percent white.

As to the racist motivation for the attack, Dent’s attorney, Greg Rohl, said of the near-lynching of his client, “If he was a white guy, would it happen? I don’t think so.” (Detroit News, Nov. 20) 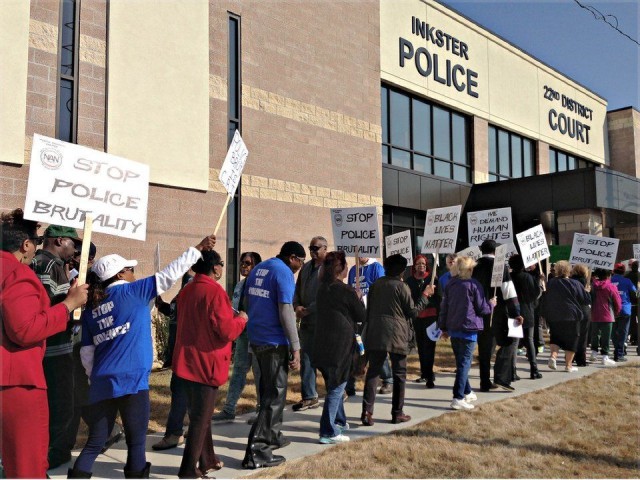 Before joining the Inkster police force, Melendez had a notorious reputation in Detroit, earning him the nickname Robo­cop. He was involved in the murders of Lou Adkins in 1996 and Ernest Crutchfield II in 2003. He was sued 12 times after being caught planting evidence on suspects, falsifying records and displaying a pattern of brutality. Remarkably, he and his crew were routinely acquitted — despite the testimony of other officers against him.

“Melendez finally got exactly what he deserved,” said attorney David Robinson, who represented the Crutchfield family. (Voice of Detroit, Nov. 21)

Detroit has a long history of struggle against police brutality and killings growing out of the Black Liberation struggle of the 1960s and 70s. Coleman A. Young, a former communist and the first African-American mayor of this majority-Black city, was elected in 1973 and immediately abolished the racist STRESS police unit that was terrorizing the Black community.

Young served as Detroit’s mayor from 1974 to 1994. On Nov. 5, 1992, Malice Green was beaten and killed by cops after a traffic stop. Green “was literally murdered by police,” Young stated on national television. White Detroit cops Walter Budzyn and Larry Nevers were both convicted of second degree murder for Green’s death and sent to prison.