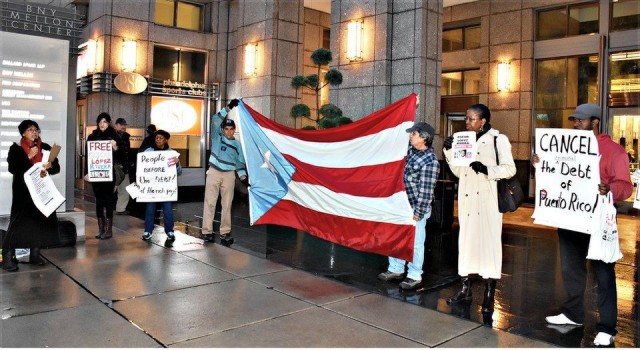 Members and supporters of the Philadelphia-Camden Boricua Committee demonstrated on Dec. 2 in front of the UBS Financial Services office in Philadelphia Center City. The protest was part of a national appeal by the New York Call to Action on Puerto Rico to demand the cancellation of Puerto Rico’s debt and expose the criminal role of the banks and financial institutions that impose brutal austerity measures on the residents of the island. That same day in Washington, D.C., the U.S. Senate Judiciary Committee held hearings on Puerto Rico’s financial crisis. Puerto Rican elected officials testified, requesting approval of a law providing for Puerto Rico’s right to declare bankruptcy, among other demands. The action in New York City was held on Wall Street, and there were similar protests in Puerto Rico.