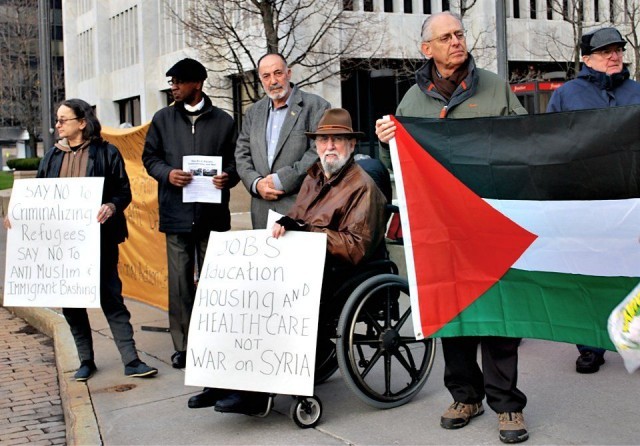 The Rochester International Action Center organized a protest Dec. 5 against the racist, Islamophobic, anti-migrant frenzy which has followed the recent attacks in Paris and San Bernardino, Calif. This climate of fear had seemingly paralyzed many local progressive forces.

The rally included representatives from the Nation of Islam, Christians Witnessing for Palestine and local Palestinian refugees. A large banner proclaimed: “Say No to Racism, War, Police Violence, and Anti-Muslim and Anti-Immigrant Bashing.”

The protest received significant local media coverage, including on two TV stations. “As you can see, there is an anti-immigrant, anti-Muslim hysteria going on around the country by politicians and their supporters,” organizer Lydia Bayoneta told the media. “We are here first and foremost to say that all refugees are welcome, no matter what country [they are from], whether it be Syria, Iraq, Afghanistan, occupied Palestine and all the countries that have been ravaged with war and poverty.”

Protesters denounced the racist demagogy, which is not only demonizing Muslims and other immigrants, but trying to distract people from the issues of police terror, inequality, lack of jobs and poverty in the United States.