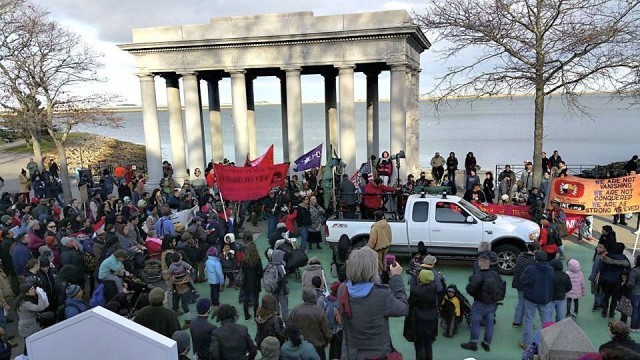 The 46th annual National Day of Mourning organized by the United American Indians of New England, rallied, marched and afterwards ate together in Plymouth, Mass. to debunk the hundreds-year-old racist myth about “Thanksgiving.” According to the organizers, a multinational, multi-generational crowd of 1,200, came from mainly the Northeast. Indigenous peoples performed a sacred ceremony and spoke in their own name on the historical genocidal treatment of Native peoples throughout the Americas since 1492 up until the present, along with ongoing resistance. The speakers were UAINE co-leaders, Moonanum James and Mahtowin Munro; Juan Gonzalez; Tiokasin Ghosthorse; Vanessa Inarunikia and elder, Bert Waters, who read a moving greeting from political prisoner Leonard Peltier. You can read the full speeches of James, Munro and Peltier at workers.org. Go to tinyurl.com/hga5975 to view the rally and the march.