The irony couldn’t have been more in-your-face. The French government, after the attacks in Paris on Nov. 13, declared a state of emergency and got it extended for three months, so the government could use whatever tactics it deemed necessary to go after “terrorists”.

So who wound up getting tear gassed, arrested and jailed? People protesting against climate change. 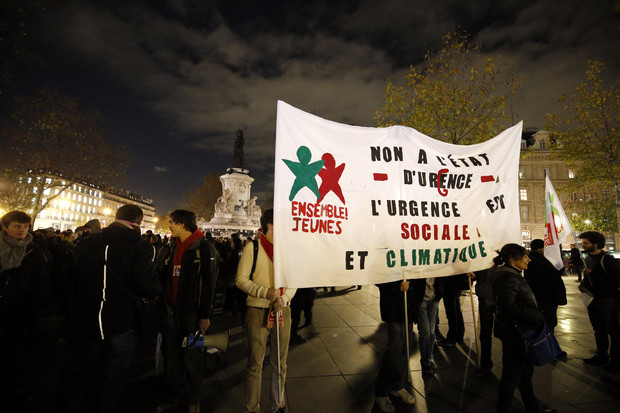 Paris, Nov. 26. The banner says “No to the state of emergency. The emergency concerns social and climate issues.”

COP21, the latest big meeting of world governments on how to ramp down global warming, had long ago been scheduled for Paris. It was too late to change the venue. So the Quai d’Orsay (seat of the French government) had to go ahead with it. But the authorities said: “No demonstrations! We’re in a state of emergency!”

The last time a major march was called to alert the public to the disastrous consequences of climate change, 400,000 people showed up — in New York City on Sept. 21, 2014. To the French “security” forces, this would be a disaster in Paris. So they banned the big demonstration planned for Nov. 29 and then physically attacked the militants who came out in spite of the ban.

It was just a corollary of the general oppression of Muslims in France that flows from the mentality of “because we’ve oppressed them, they hate us, so let’s oppress them even more.”

But think for a minute. The “war on terror” declared by Paris to justify suspending civil liberties is really a war by the NATO powers to control the Middle East. The countries of that region, rich with history, also have the mixed blessing of sitting on vast lakes of petroleum. For at least a century, this has made them special targets of Western capitalists hungry for energy to fuel their industrial expansion and profligate lifestyles for the superrich.

The burning of petroleum, along with coal, is what has blanketed our planet with a layer of carbon dioxide gas that holds in the heat, leading to an unfolding ecological disaster we cringe to even think about.

The French government represents the bourgeoisie — a French word that is now universally applied to all the superrich wheeler-dealers in every country who are top dog in this dog-eat-dog society called capitalism. In 2014, according to Oxfam International, the richest of the rich in the world — just 86 people — owned as much wealth as the 3.5 billion poorest people.

What does this mean in terms of degrading the environment? It means that the extravagant lifestyles of the richest people — with their private jets, yachts, golf courses, labor-intensive trinkets and ridiculous mansions — plus all their entourages and wannabes, are responsible for a big chunk of the global warming that is happening.

Zap them and we could begin to solve the problem — along with freeing up the masses of people so they could retool our society with energy-efficient housing, mass transit, nonpolluting energy sources and so on. All this would be easy to do once the lobbyists and their superrich patrons had fallen by the wayside — or also been zapped, as the case may be.

But the capitalist governments, like the Quai d’Orsay, want to zap the protesters and thereby prolong this unsustainable world created by capitalism.

Justice, in the long run, is nothing more than scientific truth. The truth is that all peoples, all classes, all so-called “races,” are just human beings. But today — unlike through most of the history of our species — we are divided into classes, into haves and havenots, into oppressed and oppressor nations. Justice means taking back the wealth stolen by the propertied class, by the imperialist rulers, who set themselves above the rest of us. We can and must stop them, before they drag us all down.

Kudos to the demonstrators in Paris who defied bourgeois “public opinion” and bourgeois cops to say that global warming is a much bigger disaster than any attack by oppressed peoples, no matter what their ideology, who are merely reacting to the misery that imperialism has wreaked on them.