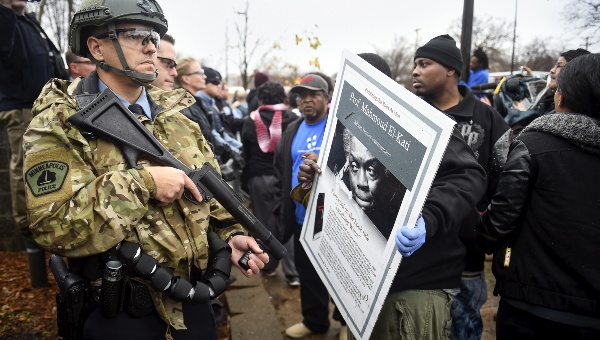 Minneapolis – A week-old protest demanding justice for Jamar Clark, who was slain by Minneapolis police, was attacked by a small group of white supremacists at 10:45 p.m. the night of Nov. 23. The racists approached the occupation at the Fourth Precinct police station as they have done for the past few nights, being disruptive and shouting racial slurs. A group of protesters were marshalling the racists away from the main protest when the white supremacists opened fire and shot five people.

Three people are in the hospital. At least one required surgery for an abdominal wound. No fatalities are reported.

Jess Sundin of the Anti-War Committee reported, “When I arrived about an hour after the shooting about 200 people were here, chanting, ‘No justice no peace, prosecute the police.’ Witnesses reported that when officers outside the station were asked to help, one cop said, “That’s what you wanted,” then turned his back and walked inside the station. Multiple people called 911; help took 15 minutes to arrive. When police finally took action, they maced the protesters and interfered with some people giving medical aid to the injured. Shameful.” Sundin added, “The people who were here when the shooting happened are stunned but remain strong and committed to the cause of justice for Jamar Clark.”

Black Lives Matter Minneapolis issued a brief message, “Tonight white supremacists attacked the #4thPrecinctShutdown in an act of domestic terrorism. We need you here tomorrow. We won’t be intimidated. Students are walking out.”

Sundin added, “White supremacists act with impunity in this country because they are emboldened by Donald Trump, The Tea Party, other politicians and law enforcement. Just two days ago Trump congratulated people for beating up a Black Lives Matter activist that asked questions at his rally. Tonight we have avowed white supremacists shooting demonstrators against police brutality. It’s sick.”

She ended by urging people to march in solidarity with #Justice4Jamar Tuesday Nov. 24 at 2:00 p.m. starting at Plymouth and Morgan Avenues in North Minneapolis.