At least 30 U.S. campuses held protests on Nov. 18 to respond to the growing number of racist attacks, which are particularly targeting Black students and the Black Lives Matter movement. These actions were organized by the newly formed Black Liberation Collective, which created #studentblackoutday. Among the campuses that held these protests were Tufts, the University of California at Los Angeles, Stanford, Yale and the University of Massachusetts at Amherst. 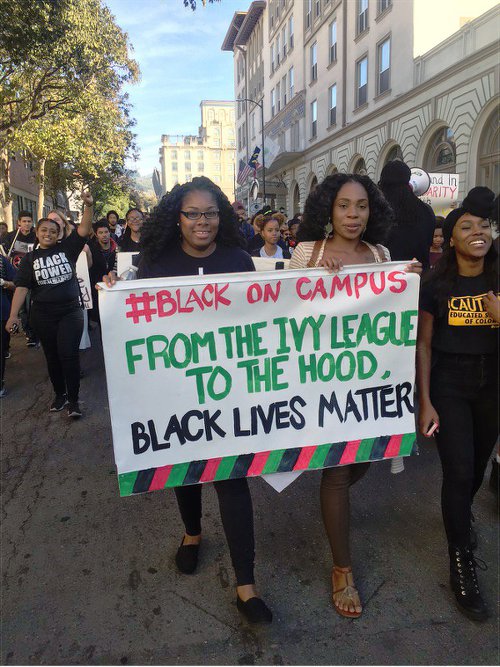 The vast majority of these campuses have student populations that are largely white and privileged with a small percentage of African-American and other students of color.

This “National Day of Action” was the second coordinated response since the inspiring victory won at the University of Missouri, where a united front of Black and white students, including the football team, forced the chancellor and system president to resign on Nov. 9. Both of them proved to be indifferent to ongoing racist attacks.

This university is only 100 miles from Ferguson, Mo., where on Aug. 9, 2014, Michael Brown, a Black youth, was murdered by a white police officer, who was subsequently exonerated by a secretive grand jury.

The fact that these protests took place on so many campuses reflects the alarming number of racist incidents, which are not a new phenomenon — but are now occurring all across the country. These campus incidents are an extension of the countless police brutality cases, especially murders, of Black youth in urban centers, and the high rate of mass incarcerations.

The whole world is getting a first-hand look at the ugly reality of what is really going on within these so-called “institutions of higher learning” — that is, the white supremacist attitudes and actions, which start from the top with the school administrations.

An “Illini White Student Union” Facebook page was recently unearthed at the University of Illinois at Urbana-Champaign. This neofascist page demonized the Black Lives Matter movement as being “terrorist.” It called upon people to take photos of Black activists at protests on this campus.

The creators of this reactionary page claim that they got the inspiration to start the racist “Union” from the 1998 movie, “American History X,” a film focused on the life of a Nazi sympathizer.

At the Harvard University School of Law in Cambridge, Mass., racists are defacing portraits of Black professors with black tape. Michele Hall, a second-year Black student, said of the defacings to the Washington Post, “I wasn’t surprised. This is part and parcel of what is happening here at Harvard and also at other institutions across the country. It’s part of a larger narrative of black students and students of color not belonging here and being excluded here.” (Nov. 19)

Along with calling for an investigation of the defacings as hate crimes, the same article reports that Black students have organized under the name “Royall Must Fall.” This group describes itself as “a movement of students calling for the decolonization of our campus, the symbols, the curriculum and the history of Harvard Law School.”

One of this group’s first demands is to replace the law school’s crest, which is the same as the coat-of-arms belonging to Isaac Royall Jr., a slave owner, whose estate helped to found Harvard Law School.

What is going on at the University of Illinois and Harvard is just the tip of the iceberg in terms of a growing revolutionary struggle of resistance on U.S. campuses. Protests against racism, sexism and lesbian, gay, bisexual, trans* and queer oppression are taking all forms and issuing immediate demands.

For instance, at Princeton University, students conducted a sit-in at the president’s office on Nov. 19, demanding that racist President Woodrow Wilson’s name be removed from all campus buildings. During Wilson’s presidency in the early 1920s, the Ku Klux Klan was emboldened and marched in the thousands on the streets of Washington, D.C.

It is important for all those in the progressive movement to continue to strengthen their anti-racist solidarity with the Black Lives Matter upsurge on and off the campuses — to help weaken capitalism’s divide-and-conquer rule at home and abroad.