The head of the U.S. Africa Command (AFRICOM), Army Gen. David Rodriguez, continues to maintain that the purpose of Washington’s military policy on the continent is to assist nation-states with enhanced security. 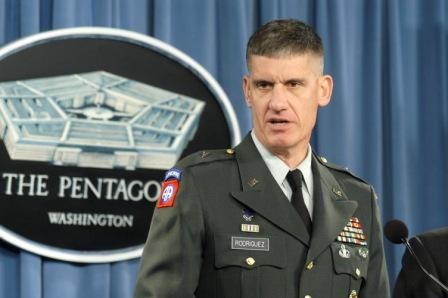 However, over two dozen people died in the siege of the Radisson Blu Hotel in Bamako, Mali, on Nov. 20, despite the presence of French and U.S. Special Forces.

AFRICOM identifies its purpose as working with African states in the so-called “war on terror,” which is a by-product of successive imperialist interventions, from Afghanistan to Iraq, Libya, Syria and Yemen. So-called “Islamist extremist” organizations have been nurtured, funded and coordinated by the U.S. since the early 1980s, when the administration of President Jimmy Carter worked vigorously to overthrow the pro-socialist government in Afghanistan that had turned to the Soviet Union for support.

The overthrow of the government of President Saddam Hussein in Iraq strengthened these same strains of Islamic organizations, spreading their influence into the Syrian conflict beginning in 2011. The outbreak of the Syrian war coincided with the destruction of Libya, which then brought unrest and instability throughout North and West Africa and eventually across the Mediterranean into Southern, Central and Eastern Europe.

Referring to Africa, Rodriguez said that the U.S. is providing help in “command and control and communications, [and] intelligence — we do a tremendous amount of intelligence training throughout the African continent. They need help in logistics and mobility. They need help in specialty skills, anti-mine or [improvised explosive devices].” (Department of Defense, Nov. 20)

Another key aspect of this policy is the molding of African military officials in the image of the Pentagon. Rodriguez stresses, “For their militaries and institutions, the most important thing for them is to grow leaders and select the right people and build the systems that sustain their efforts for the long run.”

This purported selection of the “right” leaders resulted in a military coup in Mali over three years ago. The elected head of state, Amadou Toumani Toure, was overthrown on March 23, 2012, by military officer Capt. Amadou Sanogo. After regional pressure from the Economic Community of West African States and the African Union, Sanogo later turned over the ostensible reins of power to an interim government headed by parliamentary leader Dioncounda Traore.

Sanogo was a student of the Pentagon, participating in the International Military Education and Training program. He received instruction in Georgia and at the Marine Corps base in Quantico, Va., which specializes in counterterrorism education, and studied English at Lackland Air Force Base in Texas.

In the Nov. 20 attack in Bamako, at least two gunmen walked into the hotel frequented by diplomatic personnel and international business professionals, opened fire on staff and guests, and took approximately 130 people hostage.

It was reported that Malian, French and U.S. soldiers stormed the building, ending the siege. At present it is not clear whether the gunmen or security and military forces killed the hostages.

Two Islamist groups operating in Mali and Algeria have claimed responsibility for the attack. A Nov. 20 statement on the Al Akhbar site suggested the Radisson attack was to obtain “the release of all the imprisoned mujahedeen in the prisons of Mali and the cessation of the aggression against our people in the north and center of Mali.”

In 2012, a secessionist movement based among the Tuareg people declared an independent state in northern Mali. In 2013 the French government deployed its air force and 3,000 troops to the area at the request of the newly installed president, Dioncounda Traoré.

The occupation continued through July 2014, when French forces opened a broader offensive across large swaths of the Sahel region. A United Nations mandated force, MINUMSA, has been operational since April 2013 and now numbers approximately 10,000 troops.

Pentagon air support was critical in this occupation of Mali. With the U.S. already well established in the country’s military, it was poised to carry out logistical flights transporting personnel and equipment to the French and their allies.

French forces, with Pentagon assistance, occupied Mali nearly three years ago after the collapse of the authorities in the north and central regions of the country. It is important to note that the seizure of substantial portions of Malian territory took place after the March 2012 military coup led by Pentagon-trained Capt. Amadou Sanogo.

Many analysts say a major contributing factor in the destabilization of northern Mali was the war of regime-change engineered and waged by the CIA, the Pentagon and NATO against the Libyan government of Col. Moammar Gadhafi. Members of the Tuarag nationality in Mali were living and working in Libya during the Gadhafi era; some participated in defense of the country during the 2011 counterrevolution.

Many Tuaregs fled Libya after the bombing campaign by Western imperialist states and their allies, returning to northern Mali, where unresolved inter-ethnic conflicts have reappeared since national independence in 1960.

AFRICOM and other allied forces are already planning further deployments in the so-called “war on terrorism.” Nearly two years ago the Obama administration announced the deployment of 3,500 troops to about three dozen African states.

The largest AFRICOM base is in the Horn of Africa nation of Djibouti, with thousands of U.S. and French troops at Camp Lemonier. This base has also been utilized in the Pentagon-supported bombing campaign by the Saudi Arabia and Gulf Cooperation Council coalition that has ravaged Yemen since March.

There appears to be no change in U.S. relations toward Africa and the Middle East. Both Democratic and Republican presidential candidates say nothing about the instability spreading throughout the region. It will be up to a regenerated anti-war movement in the U.S. and Western Europe to take up these issues within the broader struggles for social justice and peace.