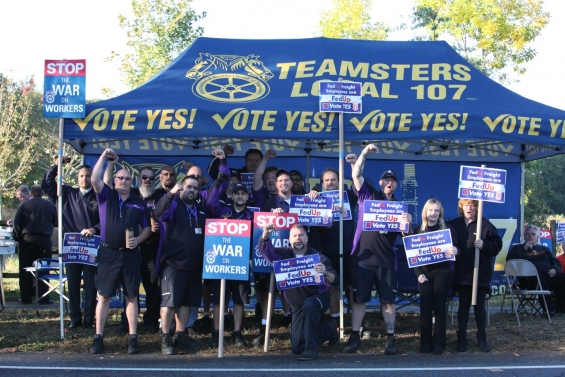 Eighty-five FedEx Freight drivers in Gardena, Calif., the company’s major Los Angeles hub, made history Nov. 9, when they led the first unfair labor practices strike in the company’s history, after having filed charges with the National Labor Relations Board. The workers accuse FedEx of illegally interfering with their right to form a union through harassment, wrongful termination and misinformation about unions. “We’ve been trying to unionize and they do everything in their power to intimidate us,” said Greg Barfus, one of the drivers on strike. “We’re tired of them violating our rights — this is our warning to FedEx that their illegal behavior needs to stop immediately.”

The drivers were joined on the picket line by over 300 Teamster supporters. “FedEx has done everything under the books to oppose workers’ right to organize. In some areas, workers have won union elections, but the company has refused to bargain,” said Randy Korgan, Teamsters Joint Council 42 organizing director, in a written statement. “We believe this action will inspire other FedEx employees to take similar actions and eventually build enough power to force FedEx’s hand. We’re in this for the long haul and this is just the beginning.”

The workers vow to continue the strike through the busy holiday season unless FedEx recognizes their legal right to collectively bargain. (FOXLA.com, Nov. 9; Daily Breeze, Nov. 9)

The First Transit MetroAccess drivers, who provide accessible public transportation to Washington, D.C., area residents with disabilities, scored a victory Oct. 16 when they ratified their first union contract. Previously, the workers had no formal grievance process, inadequate benefits and pay so low many needed public assistance to provide for their families.

Having won representation in 2014 by Amalgamated Transit Union Local 689, the MetroAccess workers entered contract negotiations with the backing of 9,000 ATU 689 members who work for Metro Bus and Rail. The paratransit workers’ contract guarantees wage increases, paid vacations, affordable health coverage, and grievance and arbitration procedures. “This is an exciting win for all of us as these workers come closer to earning a living wage,” said ATU 689 President Jackie L. Jeter. (ATU.org, Oct. 19)

After protracted contract negotiations, adjunct faculty at the Maryland Institute College of Art ratified their first three-year contract with Service Employees Local 500 on Oct. 8. Though MICA administrators refused an across-the-board wage increase, the contract adapts the existing pay scale so 300 adjuncts can more easily advance up the scale and includes an annual cost-of-living adjustment. The agreement establishes standards for the appointment and reappointment of part-time faculty, a professional development fund and an evaluation process to foster continued excellence in teaching. All help solidify the professionalism of adjunct staff.

Unionizing at MICA is part of the national movement to establish collective bargaining rights for part-time faculty at U.S. colleges and universities. This is the first bargaining unit in the greater Baltimore area, which has thousands of adjunct faculty at dozens of private and public educational institutions. (In These Times, Oct. 5)

Although the Supreme Court is known to be hostile to class action lawsuits, it heard arguments on Nov. 10 about a wage theft lawsuit pitting Tyson Foods against about 3,000 workers at a pig-processing plant in Iowa. The first judge who heard the case allowed the workers to band together in a single lawsuit seeking overtime pay under the Fair Labor Standards Act and awarded them $6 million. The workers want to be paid for the time they spend putting on and taking off protective gear and other work-related functions. They cite an expert witness’s statistical calculations based on hundreds of videotaped observations of how long it took the workers to get ready. The Nov. 13 Huffington Post pointed out this case follows “decades of cases, court orders and [Department of Labor] investigations finding the company owes millions to its workers.”