Excerpts from a speech by Sara Flounders at the 2015 Workers World Party national conference; Flounders is a WWP Secretariat member and co-director of the International Action Center. 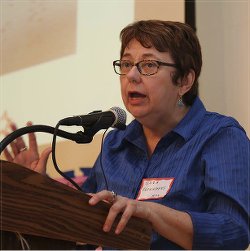 The world situation appears very dangerous this week. There are two crises barreling at us from two different directions.

One crisis is military brinkmanship. The Pentagon is rushing F-16C Dogfighter jets to Syria. Why is that a big deal? There are already a lot of aircraft bombing Syria.

There were 13 countries bombing Syria before Russia came into the war, not just U.S. bombers. You have Saudi Arabia, France, Belgium, Canada, Jordan and Turkey, among others — none were invited by Syria. The U.S. military is coordinating the whole operation.  All these countries claim to be hitting ISIS but not having any impact except that they are totally destroying Syria; half the population is displaced.

But the F-16C Dogfighter jets that the U.S. Air Force just sent to Syria are armed with air-to-air missiles. They are capable only of fighting other aircraft. ISIS does not have an air force.  Russia does. This is a dangerous escalation.

At the same time, President Obama made the first public announcement of ground troops, Special Ops forces, to Syria, along with a big reinforcement of U.S. “advisors” to Iraq.

A very dangerous provocation is looming. We need be prepared for it. We don’t know what incident might touch off a far wider war. Will it be a plane crash in the Sinai Desert? Or a Russian jet shot down in Syria?  Or a NATO missile in Ukraine? Or a ship in the South Pacific, where the U.S. is in almost a standoff with China? Or U.S. nuclear “war games” off the coast of the Democratic People’s Republic of Korea?

To understand what is going on behind all these crises, we need to view them as one world war on many fronts.

What is driving these nonstop crises?

Capitalism is facing a giant glut. The world commodity markets are crashing. Machine parts, heavy equipment, tubing and pipes, along with oil, gas, steel, coal, copper, zinc, corn, soy and wheat are all valued at less than half of the price of just one year ago.

There are increasing predictions in the business media of a new, disastrous capitalist crash. They can feel the ground shaking. A new earthquake is rumbling. Yet the workers have not been rehired from the 2007-08 capitalist crash.

We face today a larger gap between rich and poor than at any previous time in human history. There are 80 multibillionaires worth more than the combined assets of one-half the population of the world. This is how extreme and distorted the whole capitalist system is. It has superproductive capacity, far beyond what it can ever hope to sell at a profit.

Capitalism has an unsolvable problem.  How can this brutal global empire hold this bloated, decaying system all together? It is increasingly difficult. It needs endless war. It needs racism. It needs division. It needs repression.

Great, unanticipated crises have been the undoing of many a movement and many political parties.  But with crisis also comes opportunities to intervene.

Are we ready for the great crises that the capitalist system unleashes on the working class? No, we are not. That is my honest appraisal.

But even a handful of communists — if they have revolutionary determination and are not knocked over or caught off guard — have the ability to give leadership in times of crisis. This is something that Workers World Party has been able to do again and again in past crises. Give leadership, far beyond our size, because we aren’t bowled over.

We face a crisis a minute. There are two to three racist police murders every day, each more outrageous than the last; tens of thousands of police attacks and the largest prison population in the world; U.S. war crimes around the world in ever greater numbers, every day and every hour. How to orient the Party and a movement fighting for change?  This is where [Vladimir] Lenin is still our anchor.

This period of crisis needs a revolutionary socialist movement where every cadre’s instincts and reflexes are to stand against racism, stand with the oppressed and always oppose its own ruling class — that is Leninism.

Capitalism is not working. There is growing interest today in socialism.

We have to contend with political leaders who claim to be socialists or democratic socialists and yet support U.S. wars.

Bernie Sanders promises a political revolution and a living wage, racial justice, a humane immigration policy ending income inequality. But Sanders also promises that he will defend “America’s vital interests. Force must always be an option.” Sanders has voted funds for every U.S. war. He supports free trade and Israel’s “right to defend itself.” In essence, he stands for defending the whole rotten racist system.

There are also lots of campus socialists who say no against U.S. wars, but always explain why you should hate whomever the U.S. government is targeting in Syria, Ukraine, Libya, China, Venezuela or Cuba.

A compass for the movement

We need to look at every issue in the same way that a compass always points north.

A compass does not point all over the dial. It is the same with us.  Our compass points toward opposing U.S. imperialism, always focusing on imperialism’s crimes. If we keep our focus, we won’t get diverted or confused.

A compass is not a crystal ball. But it is a very useful tool. It has been used for hundreds of years. It is most useful in a storm, in new terrain or in charting a new path.

We need to constantly point the movement back towards opposing U.S. imperialism. Acting as a compass for the working-class movement in the U.S. will build socialist unity.

In every crisis the media are full of “blame Russia,” “blame China” and denounce them as imperialists; or the message is “blame Syria,” “blame Iran” and demonize them as monsters. This churns up so much blame that U.S. imperialism is let off the hook.

This is A-B-C. The class struggle is one war and we take sides. Workers World Party is a combat organization.

The basis of Leninism is to recognize the responsibility of workers’ movements in imperialist countries to always oppose their own ruling class. Otherwise, we will be lost. We will drown in media hype, in the layers of propaganda, chauvinism and racism that saturate the air we breathe. This poison can seep into the party itself and immobilize us. It is more difficult in the center of imperialism to maintain this revolutionary edge.

Facing a refugee and migrant crisis

Tens of millions of migrants are fleeing economic disaster in home countries created by free trade zones and globalized capitalism.  There are millions of war refugees of U.S. wars in Afghanistan, Iraq, Libya, Syria, Sudan and Yemen. U.S. wars have totally destabilized Africa and West Asia.

Every war has a precursor of a big media blitz of desperate people or weapons that supposedly put the world at risk and a call that “We must do something.”

We need to be on guard that the huge publicity and media focus on the flow of refugees desperate to reach Europe is being orchestrated to break down the resistance in Europe to NATO strikes to set up no-fly zones in Syria.

Declaring a no-fly zone is the pretext the U.S. used in Libya, in a seven- month bombing campaign that left an entire country in smoking ruin and a population destitute.

The one weapon the working class has is international solidarity. This means always standing with the oppressed, especially when they are under attack. It means never accepting any excuse for a U.S. war. Any war where U.S. imperialism succeeds, the workers here and around the globe suffer a huge setback.

Internationalism is a weapon because it builds unity and class consciousness. The working class today is more international in its composition and in communication than at any time in history and more open to understanding the need for solidarity. Millions of workers feel the struggle in their countries of origin and come with rich experiences of class struggle.

U.S. imperialism is in a desperate situation because none of their wars have succeeded. They have overturned governments and left smoking ruin for the populations in Iraq, Afghanistan and Libya but have not succeeded in stabilizing U.S. domination.

Let’s be determined to focus our party and the whole movement on opposing at every step U.S. imperialism: the enemy of all humanity. That is our compass.
We need the same absolute determination here in the class struggle that the Palestinian struggle conveys when they say and the whole world now responds: “Palestine will win!” The same confidence that the Cuban people exude when they declare: “¡Venceremos! The workers united will never be defeated!”