From Nov. 11-14, activists from Detroit and Ann Arbor, Mich., drove hundreds of miles to Benton Harbor, Mich., to pick up Dorothy Pinkney, spouse of political prisoner the Rev. Edward Pinkney. They then headed north another 500 miles to Marquette Branch Prison. 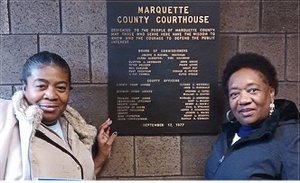 The round trip, a total of over 1,400 miles, finally broke the isolation prison officials had imposed on Rev. Pinkney when, starting Oct. 23, they denied him all telephone access. Rev. Pinkney had been punitively transferred to the far north of Michigan’s Upper Peninsula from a prison close to his spouse, attorney and supporters. They visited Rev. Pinkney on both Nov. 12 and Nov. 13.

Rev. Pinkney is serving a 2 ½- to 10-year sentence for allegedly altering five dates on a petition in 2014 seeking to recall then Benton Harbor Mayor James Hightower. Although there was absolutely no evidence linking the reverend to the changes, the all-white jury was told by the prosecutor and judge that they could convict him “with no evidence” and assume that he was to blame because he led the recall campaign. He began serving his sentence last December.

In a letter sent from Marquette Prison and posted on the bhbanco.org website — BANCO is the Black Autonomous Network Community Organization, a group Rev. Pinkney heads — he wrote: “I was transferred to Marquette Prison, shackled, mistreated and intimidated. I was forced to strip on five different occasions. I am forced into overcrowding, inadequate exercise, lack of clean clothing and inadequate medical care. I believe that [prison authorities] have put a hit on me, inside the prison system. I believe they are trying to force me to die in prison. If I do not survive this, you will know the reason why.” Rev. Pinkney turned 67 last month.

Efforts to recall Mayor Hightower were thwarted by the courts and the prosecution of Rev. Pinkney. However, Hightower was ousted by Benton Harbor voters this Nov. 3 in the regular election. City Commissioner Marcus Muhammad, sweeping the election 666 to 444, will take office on Jan. 1.

The Final Call newspaper, writing about Commissioner Muhammad’s election, noted that “a major community leader, Rev. Edward Pinkney, was jailed after what many residents believe was a politically motivated arrest and trial. … Mr. Pinkney led the mobilization for the recall election and was a strong supporter of Mr. Muhammad. Rev. Pinkney challenged the awesome power of giants like the Whirlpool Corp., which is based in Benton Harbor, saying the corporation had too much power and received too many benefits while giving Benton Harbor Black residents little.” (Nov. 11)

The case of Rev. Pinkney has been gaining the attention of other media in the United States and abroad.

Workers World spoke to Marcina Cole from the organization Observers in the Court, who made the trip and visited with Rev. Pinkney. She reported that he seemed more agitated than in previous visits when he was at Lakeland Prison. Guards swarmed all through the visiting area constantly. Cole and Dorothy Pinkney were the only African-American visitors at this remote prison.

“I didn’t see even one African-American guard,” said Cole. “Rev. Pinkney estimated that 80 percent of the prisoners are white.” She also noted that Rev. Pinkney’s clothes, which “disappeared in the wash,” have not been replaced. “Rev. Pinkney wants his supporters to demand that Gov. Rick Snyder remove Warden Robert Napel and close down the deteriorating Marquette Branch Prison.”

Between visits, the group found Snyder’s Marquette office. They met with a staff member, who politely listened to their complaints and concerns.